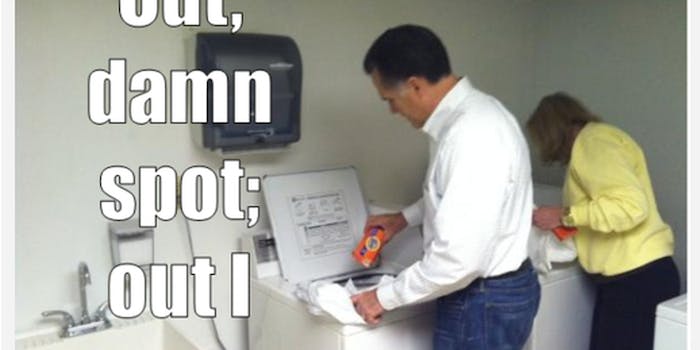 If thou thinkest Mitt Romney is low-browest, thinkest again.

Much of the Internet’s mockery of Mitt Romney has fallen in the brilliant but low-brow quadrant but a new Tumblr is deliciously high-brow and brilliant.

Titled “Mitt Romney Does William Shakespeare,” the blog translates Romney’s quotes and thoughts into Shakespearean language. Why? “Because he’s a natural,” the blog’s description explains.

The blog showcases Romney’s eerie Shakespeare similarities in a single picture format. It was started in late March by Meg Lanker-Simons who uses reader submissions to power the blog.

“I am constant as the northern star,” a quote from the Julius Caesar, is fittingly placed on Romney as he stands next to his debate opponent, Rick Santorum. Like Caesar, Romney won’t go down without a fight, although judging by the delegate count, Santorum is the one dying.

But it’s not all serious on the blog, as Romney’s wholesome comedic stylings oddly fit in to Shakespeare’s comedies Much Ado About Nothing and A Comedy of Errors. We don’t need to “unzip” Romney to see that he’s funny.

Perhaps our favorite is a photo of Romney doing the laundry (see, he’s just like one of us!) with a quote from Macbeth, “Out, damn spot; out I say!” Again, with a killing reference, but we don’t know what kind of spot Romney is getting out, do we?

If the presidential thing doesn’t work out for Romney maybe he could teach Shakespeare since he appears to be a good match.