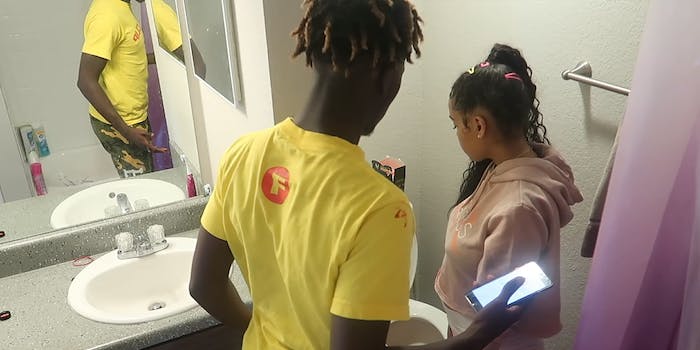 YouTube couple TeamVZ is gaining a backlash for a prank video faking a miscarriage. The video was posted sometime in August but it’s gaining traction amid calls for the video-streaming giant to take down the controversial content. Screenshots of this prank are circulating on Twitter, and most users are outraged.

YouYube, however, has no plans to take it down.

In a 14-minute video titled “I HAD MISCARRIAGE PRANK (EMOTIONAL),” a prank is orchestrated by Vanessa against her partner Zavi. She is, however, actually pregnant.

From setting up the camera up to where she got the fake blood from, Vanessa wasn’t that confident with her plan. But she admitted that using her best acting skills would make the prank believable, and it worked.

“Vanessa, are you crying? What is wrong with you? What’s on your hands? Did you just start your period? Can you have your period while you’re pregnant? Vanessa, what’s wrong? Where is all this blood coming from? Oh my god … I’m about to call the doctor. Sit back down, that’s too much blood,” Zavi said in the video, freaking out.

He seemed close to calling 911 when he couldn’t reach his mother for help. In the video, Zavi goes in and out of the toilet to seemingly get help from their neighbors. That’s when Vanessa confesses that it’s all a prank.

“That is not something you play about, bro. Now you know if something were to actually happen, I’d be mad as hell,” he said in response.

Vanessa seems sorry but was more concerned about their subscribers “liking” the video enough to garner 10,000 likes. She was successful because the video has 700,000 views, with 25,000 likes. Although the comment section is disabled, livid people on Twitter have been asking YouTube to take it down.

I can't believe that miscarriage prank video is still on YouTube

According to BuzzFeed News, YouTube has ignored requests on inquiries about disciplinary action. But last night YouTube’s official Twitter account responded to the viral thread: “Update on this—we did remove this custom thumbnail and age-restricted the video. Appreciate you bringing this to our attention.”