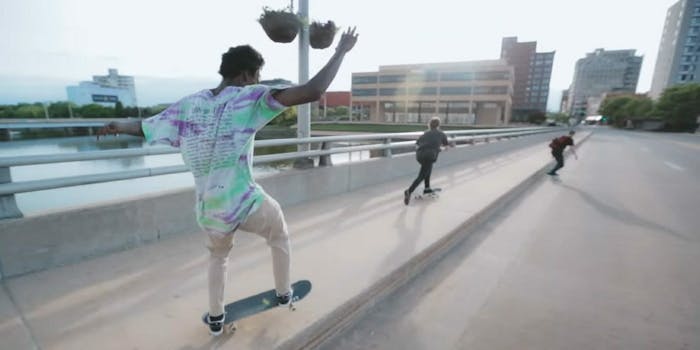 ‘Minding the Gap’ is one of the year’s best docs

A group of friends faces their demons as they transition into adults.

Minding the Gap is about how hard it is to break the cycle. Be it the cycle of small-town malaise or familial troubles. Minding the Gap is an observant film, in search of answers that only time can bring. For audiences, the wait is only 90 minutes. For director Bing Liu and his friends, the search has taken most of their lives.

From the time they were teenagers, Bing and his friends Zach and Keire have found solace in friendship. Friendship and skating gave them an escape from their troubles. For Bing and Zach, that meant getting away from volatile, violent homes. For Keire, his struggle is finding a place to fit in. Bing is the historian of the group. He filmed themselves skating, partying, and in their more vulnerable moments. The result is a melancholy portrait of small-town life. Its subjects are specific, but its themes are universal.

Critics often want documentary filmmakers to keep themselves out of their films. That objectivity has its place, but not here. Minding the Gap hits so hard because of Bing’s proximity to his subjects. You’ll recognize Bing and his friends as the same kids you saw in high school who skated everywhere and were always high or about to get high. Throughout the film, Keire is the most vocal about the healing power skating has for their group. Through the editing and score, Bing simulates the calming effect of skating for the audience. These moments tell us everything we need to know about these friends.

The footage of the friends skating is a façade though. Even at their happiest, ollie-ing and kick-flipping their way around their hometown of Rockford, Illinois, you get the sense that it’s not going to last. They know it can’t last just as much as we do. We’re watching sand fall through the hourglass. Their desperation to hold on to those moments is too real. The carefree days of skating to get away cede to the inevitable harshness of life.

Rockford has the dishonorable distinction of having a high rate of domestic violence. Bing, during an interview with his mom, excavates their past with her abusive second husband. These scenes are painful, and the sense of helplessness that comes up is overwhelming. While Bing goes through his past, in the present he watches Zach go from a goofball to becoming an early father to abusive toward his child’s mother, Nina. In one striking moment, Zach runs into a restaurant to pick up food and Nina describes one rough encounter to Bing. As Zach approaches the car she asks Bing not to say anything, and you can see the entire cycle repeating itself.

The remarkable thing about Minding the Gap is the willingness of everyone to share their worst moments. In one particularly tough moment, Keire goes to visit his father’s grave. He hasn’t been to the cemetery since the funeral and he roams around unable to find the grave. When he finally gets there he’s overcome by years of pent up emotions. Minding the Gap, ultimately, is about facing your demons and finding the strength to move forward in an indifferent world. Despite the inherent sadness of it all, the film does find a hopeful note to end on. It’s distilled into a brief ending, but it’s what the characters have chased, knowingly or unknowingly, their whole lives.

Minding the Gap, available to stream right now, is one of Hulu’s best releases yet, and very much worth your time.