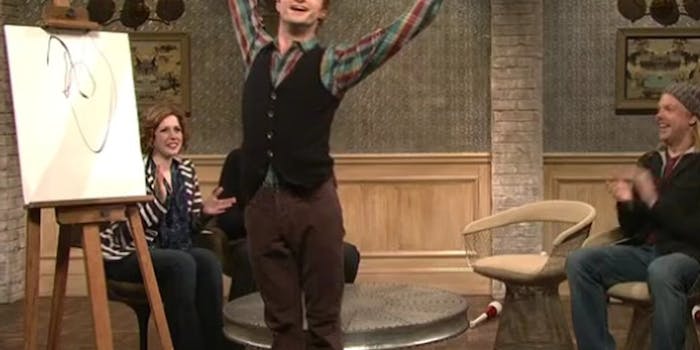 Millennials are the butt of a Saturday Night Live skit

Millennials were lampooned on Saturday Night Live—and they take it in stride on Twitter.

Saturday Night Live apparently struck a nerve when it lampooned Millennials, the so-called “entitled, coddled, self-centered punks” generation with its skit, “You Can Do Anything!”

YouTube and Twitter-famous young folks were the particular butt of the Generation Y jokes, but surprisingly, the online outrage from Millennials was minimal proving that as despised as they are, at least they do have a sense of humor.

The four minute sketch follows a talk  show format, with two hosts—one a photo-blogger, the other, an independent film-maker. The three guests include a man who cannot juggle, someone who is “Twitter famous,” and a man whose YouTube video has been viewed more than one thousand times.

The sketch is full of biting one-liners, like “you’re so self-promotional, and everyone enjoys that,” “I tried, therefore no one can criticize me” and “the world needs more singer-song writers and fewer doctors and engineers.”

“Not to insult my own generation, but that “you can do anything” sketch was so on” tweeted Kayla Caldwell.

sohappi called it “depressing,” Brando Leedy said it hit a “little too close to home,” and Josiah Williams wrote “our entire generation needs to see this, and comprehend it’s meaning.”

“This sketch is so﻿ GPOY of the new cyber generation OMG” wrote sploink  on a copy on YouTube.

Non-millennials were particularly tickled pink by the sketch. Brad Hubert called it a “true picture” of the generation, while J.C. Bradbury wrote that because it was “on target,” it was “more sad than funny.”

Others clamored for it to become a “staple” on the show, or required viewing, presumably for Millennials.

The fact that the skit was immediately followed by Millennial and singer Lana Del Rey, did not escape the Internet’s notice. (Del Rey is the “edgy” singer who nearly ripped the Internet apart when her YouTube song and video  “Video Games” went viral last year.)

“Was it a coincidence that this skit was on the same week that Lana﻿ del Rey was the musical guest?” wrote bernieensatclearpass on a copy of the skit on YouTube.

Tara Ariano tweeted it was a “thinly veiled slam” of the singer, while NBC News Anchor Syan Rhodes wrote, in a tweet shared more than one hundred times: “Oh I get it. Lana Del Ray was an extension of that earlier ‘You can do anything’ sketch.”