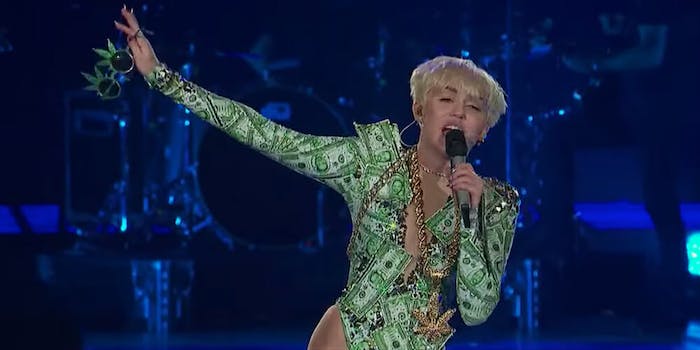 She apologized in the comments section of a fan's YouTube video.

Miley Cyrus apologized, yet again, for controversial comments made in 2017, regarding her disassociation from the hip-hop genre.

Cyrus has been facing criticism, since her Bangerz era, for appropriating and exploiting Black culture. In 2017, she told Billboard that hip-hop was “too much” for her. Cyrus also said that some of the music within the genre was too explicit and degrading for her to listen to–which is why she decided to leave the genre after her brief stint in it through her 2013 album, Bangerz.

“I also love that new Kendrick (Lamar) song (’Humble’): ‘Show me somethin’ natural like ass with some stretch marks.’ I love that because it’s not ‘Come sit on my dick, suck on my cock.’ I can’t listen to that anymore,” Cyrus told Billboard, as she was promoting her 2017 country album Younger Now. “That’s what pushed me out of the hip-hop scene a little. It was too much ‘Lamborghini, got my Rolex, got a girl on my cock’—I am so not that.”

Backlash ensued. Many took issue with the fact that Miley Cyrus, a white woman, negatively stereotyped hip-hop after using the genre to sell millions of albums.

After the initial criticism, Cyrus responded in a now-deleted Instagram post by saying that Billboard sensationalized her comments.

“So, to be clear, I respect ALL artists who speak their truth and appreciate ALL genres of music (country, pop, alternative …. but in this particular interview I was asked about rap),” she wrote in the Instagram caption at the time.

But the damage made by her comments had already cemented what most people had felt during her entire Bangerz era–that Miley Cyrus was a culture vulture.

Since Bangerz, Cyrus has released a psychedelic rock album and a country album–neither of which made as much of an impact as Bangerz did.

So, it is no surprise that her latest project, She is Coming, marks her return to dipping into the hip-hop genre. This time, Cyrus is determined to do things differently after apparently becoming more culturally sensitive and aware in recent years.

A YouTuber, who goes by As Told By Kenya, released a video about why Cyrus is her “problematic favorite.”

Cyrus saw the video and left a comment addressing her past controversial comments about hip-hop.

“I want to start with saying I am sorry. I own the fact that saying … ‘this pushed me out of the hip hop scene a little’ was insensitive as it is a privilege to have the ability to dip in and out of ‘the scene,'” she wrote. “I fucked up and I sincerely apologize. I’m committed to using my voice for healing, change, and standing up for what’s right.”

It seems like Cyrus is off to a good start with this new, post-Bangerz era.