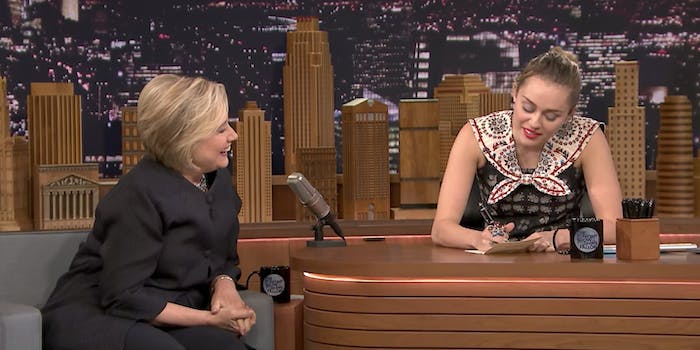 Hillary Clinton reads thank you note to the women of America

Clinton also wrote her own thank you letter to women in the United States.

Each writer penned the former Democratic presidential candidate thank you letters while sitting alongside her on stage.

“You’ve inspired so many people around the country, including many right here on staff at the Tonight Show,” Fallon said. “I know that our female writers in particular are big fans and they wanted to thank you in person.”

Staff writers joined Clinton on stage one at a time and thanked her for her work. At times the thank you letters were serious—thanking her for being the first woman to accomplish so much in politics—and at other times silly—thanking her for remaining poised throughout Donald Trump’s presidency but offering to buy her a gallon of ice cream any day.

“Thank you, Hillary, for always sticking to the issues, even as people criticized your for superficial things like your hair, your wardrobe, and your appearance,” writer Caroline Eppright said. “You showed girls everywhere that politics isn’t a popularity contest, because if it were you would have won by about three million votes.”

Cyrus, who has a week-long residency on the show this week, also joined the writers in thanking Clinton.

“Thank you, Hillary, for being a constant beacon of strength, hope, and determination for me and millions of other young women,” Cyrus said through tears. “You’ve been a role model and an inspiration and a voice of reason in uncertain times. I could go on and on, but I’d like to get right to the point. Can I give you a hug?”

I got my hug!!!! @hillaryclinton today was one I will never forget …U are endlessly inspiring , & I hope you know how loved / appreciated pic.twitter.com/YxA9V9t3Jy

Clinton ended the segment writing a thank you letter of her own.

.@HillaryClinton pens a Thank You Note of her own #FallonTonight #MileyWeekOnFallon pic.twitter.com/W2HqFgqCox

“Thank you Miley, the Tonight Show writers, and all of the women and young girls out there,” Clinton said. “You are smart, strong and deserving of every opportunity. Together, we’ve made our voices heard, we’ve done great things and we’ve come a long way. But as Miley would say, we can’t stop and we won’t stop.”