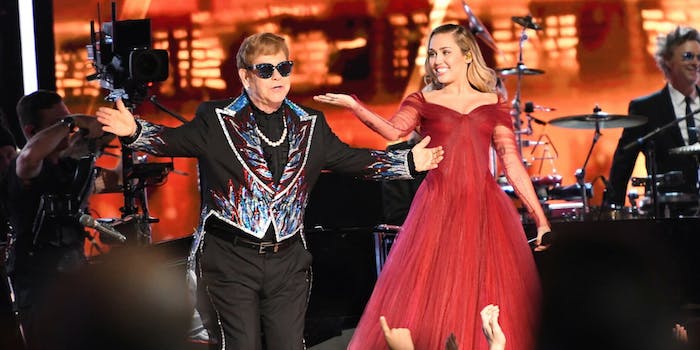 She's all grown up.

John began the performance onstage alone, with no decorations aside from a single white rose on top his piano, a nod to the Times Up and #MeToo movements. Cyrus then joined him for the second verse.

The duo kept to the classic version of “Tiny Dancer”—no remixes here—a song which has become an anthem since it first debuted in 1972, perhaps with the help of its appearance in the movie Almost Famous.

Many viewers on Twitter couldn’t help but note how the performance embodied Cyrus’ dramatic transformation over the years. Cyrus singing in a floor-length ball gown is a stark contrast from her performance at the VMAs with Robin Thicke in 2013.

And don't get me twisted, Miley got vocals. But we let White women artists go from twerking half naked to singing in ball gowns with Elton John in a way we do not let Black women artists. And call it evolution. I hope we give our girls this kinda artistic flexibility. #GRAMMYs

when you can't deny Miley can sing but you can also never forget #GRAMMYs pic.twitter.com/NsZwA8nvGB

John has a history of partnering with younger artists for Grammy performances. In the past, he’s shared the stage with Eminem, Lady Gaga, and Ed Sheeran. Cyrus, however, has only performed at the Grammys one other time, when she performed “Fifteen” with Taylor Swift.

Other highlights included Kendrick’s jaw-dropping performance that kicked off the evening, Cardi B and Bruno Mars’ “Finesse” duet, and Kesha’s emotional salute to the #MeToo movement.

Bruno Mars surprised everyone by taking home the best record of the year and best album of the year awards, but it’s OK—we’re sure Lorde, Kendrick Lamar, Jay Z, and Childish Gambino are enjoying their consolation puppies.