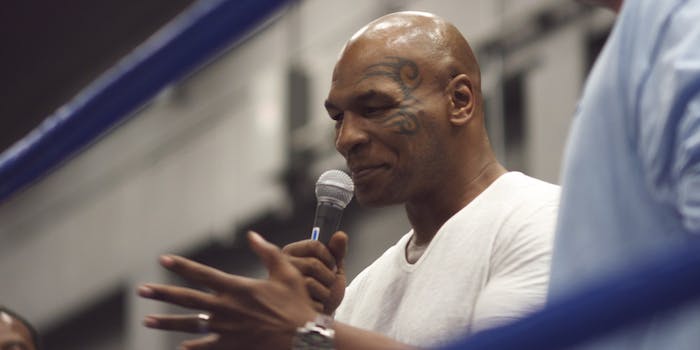 Mike Tyson wants you to pick his greatest-ever knockout

Mike Tyson was one of the greatest boxers in history. Watch every KO here.

In his prime, Mike Tyson was one of the greatest boxers in history. Having worked hard to recover his professional reputation after his 1992 conviction for raping a Miss Black America contestant, Tyson is lately reaping the rewards of a towering career.

And one of the biggest rewards for any boxer surely has to be snagging Martin Scorsese and Jamie Foxx to direct and star in the biopic of your life.

In addition to the surprise announcement about Scorsese and Foxx, which Tyson first leaked yesterday on morning radio, Tyson uploaded a compilation of all 43 of his knockout matches over his career on YouTube yesterday afternoon.

Tyson is asking his followers and fans to help him pick the 10 best KOs of his career, ostensibly to help his pal Foxx prepare for his role in the film, but most likely to help create buzz for the film in the form of an instant viral hit.

Knowing that Tyson is a boxing genius pales in comparison to actually seeing him in action—which is probably why the video has already racked up over 240,000 views. The long list of knockouts clocks in at nearly an hour. It includes highlights like his debut fight KO against Hector Mercedes in 1985, in which Mercedes goes down in round 1, and his spectacular pummeling of Marvis Frazier at 40:09.

Tyson lost only six fights in his his 58-match career. Arguably none of those will ever eclipse the notoriety of his rematch with Evander Holyfield, which resulted in his disqualification over the famous ear-biting incident.

And it’s equally important that time not erase the history of his six-year prison sentence for raping college student Desiree Washington. Tyson served only three years.

But anyone looking for evidence that Tyson is one of the greatest boxers in heavyweight history need only look at this series of matches, in which Tyson, smaller and with shorter arms than most of his competitors, nevertheless succeeds over and over again at pinning them against the ropes and going all in. His history of assault and his status as a convicted rapist accompany a history of extraordinary fighting.

We hope the biopic takes an unflinching look at Tyson’s biggest fights—both in and out of the ring.