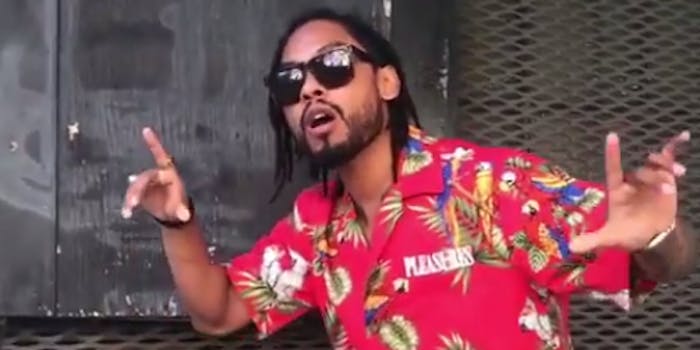 Pop singer Miguel likes to do something on Twitter he calls #whwcover: It’s a series of videos of him singing a cappella versions of different artists’ songs. For his latest edition Wednesday, he chose something by the Russian band Pussy Riot called “Make America Great Again.”

The all-girl protest punk group was famously jailed in 2012 for staging a show inside a Moscow cathedral. Their song titles include “Kill the Sexist,” “Death to Prison, Freedom to Protests,” and “Mother of God, Drive Putin Away.” So it makes sense why they might be on Miguel’s mind in the wake of the Charlottesville, Virginia, attacks.

“Did your mama come from Mexico / Papa come from Palestine / Sneaking all through Syria / crossing all the border lines?” Pussy Riot coos in the bridge.

“Let other people in / listen to your women / stop killing black children.”

So Wednesday evening, Miguel took a swing at his own “shitty emo cover” of the song:

But Miguel seemed to think he hadn’t done the original justice.

“You gotta hear the actual song,” he said. “It’s legit a jam, feel good even!”

Here’s Pussy Riot’s video in case you want to do just that: