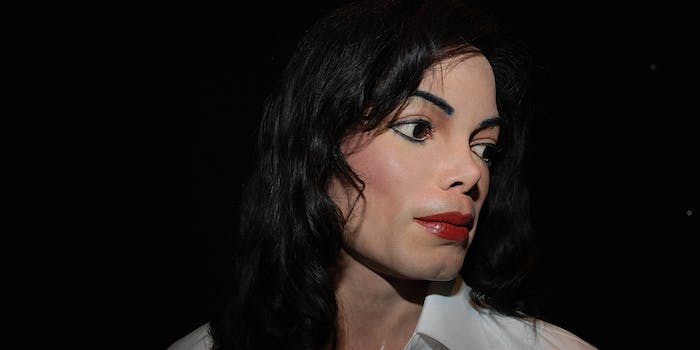 I love the King of Pop, but the idea that hearing this music is a net positive for humanity is misguided and naive.

Epic Records announced Monday that nearly five years after his death, Michael Jackson would be releasing new music. The King of Pop’s first posthumous LP, XSCAPE, will arrive May 13, featuring eight new songs with production from Timbaland and a promise from L.A. Reid to “contemporize” Jackson.

Initial response has been largely positive.

So excited. Heard some while I interned here, so good —-> XSCAPE: NEW MICHAEL JACKSON ALBUM http://t.co/udeWwDPwgh

Fair enough: It seems like a good thing on paper.

I love Michael. I cried when he died and spent that night dancing to his music until after last call. But the idea that hearing this music is a net positive for humanity is misguided and naive.

This project is a pointless, exploitative cash grab that will be remembered less fondly than Michael Jordan’s tenure with the Wizards. In fact, this should not be a controversial position, given a number of critical x-factors at play.

1) If MJ wanted us to hear these unreleased sketches, we would have.

Michael Jackson, creatively, was a notorious control freak. Remember his touching and beautiful Simpsons cameo? Of course you do. He originally insisted on the episode being about he and Bart staying up late to write a song. He asked that a joke about Prince become a joke about Elvis. He wrote “Happy Birthday Lisa” but insisted that soundalike Kipp Lennon sing the thing in order to play a joke on his brothers. The rest of his non-singing voice work was then credited under “John Jay Smith,” surely less than ideal from a marketing angle. I have battled the ethics of stealing music forever, but the notion that unearthed and private material be sold under the Michael Jackson banner is inherently deplorable.

How can you make a Michael album without Michael there to trim its edges and insist that a single be written about orphans? He was the world’s finest song and dance man, but Michael’s water-walk moves and pyrotechnics-infused live spectacles mask his songwriting instincts. Look at what the dude wrote. And just look at what a perfectionist he was in the studio. From a ‘90s-era TV Guide interview:

TV Guide: You also said [Thriller] was a sad time.

Michael Jackson: Yeah. If I don’t get exactly what I’m looking for, I get very depressed.

TVG: You mean the album still didn’t live up to what you had envisioned?

TVG: Which songs disappointed you?

MJ: “Wanna Be Startin’ Something.” Songwriting is a very frustrating art form. You have to get on tape exactly what’s playing inside your head. When I hear it up here [points to his head], it’s wonderful. I have to transcribe that onto tape. “The Girl Is Mine” [his duet with Paul McCartney] wasn’t completely what I wanted, but it’s very nice. But “Billie Jean” is there. I worked so hard on that. I worked for three weeks on the bass lick alone.

Timbaland is one of music’s all-time production gurus. During his early pro years, the man’s work showed boundless flair: Usher, Jodeci, Ginuwine, Aaliyah products were the time capsule efforts. But under Babyface, he also helped craft underrated, perfect singles like “This Is for the Lover in You.”

Check out this video of when Timbaland first played the “Dirt Off Your Shoulders” beat for Jay Z.

Recently, his form just hasn’t been particularly challenging. After the Justin Timberlake cornerstones from FutureSex/LoveSounds, he’s displayed an increasingly redundant reliance on a short rotation of distinct sound effects and bounce patterns. His drum kit is an open-sourced goodie bag for countless imitators.

His last five years have been marked with failed attempts to relive the Timberlake magic, and industry favors with the Jonas Brothers, Shakira, Chris Cornell, Chris Brown, Jamie Foxx, Ricky Martin, Robin Thicke, Cher, and Dido. I bet Timbo has been watching Pharrell’s resurgence and career highs, stewing with competitive angst. But another celeb plastic surgery job is not the answer.

Two years ago, Timbaland and Missy Elliott opted out of the Drake-helmed, posthumous Aaliyah remix project for, presumably, personal reasons. This is what his manager Mona Scott-Young released:

“Although Missy and Timbaland always strive to keep the memory of their close friend alive, we have not been contacted about the project nor are there any plans at this time to participate … We’ve seen the reports surfacing that they have been confirmed to participate but that is not the case. Both Missy and Timbaland are very sensitive to the loss still being felt by the family so we wanted to clear up any misinformation being circulated.”

It wasn’t a good idea then, and still isn’t because …

5) When have posthumous releases been good?

It’s a short list. Big L’s The Big Picture was more of a collection of underground successes, and its purposes was to announce to the world, “Hey this really awesome rapper is dead you should check out his rapping.” That’s a stocked category, sure. But with iconic titans? I mean, John Lennon wasn’t interesting with Paul, George, and Ringo rearranging the tapes. Sean Combs has dedicated almost 20 years to spotlighting Biggie’s verses, and this has been memorable for one song (“Dead Wrong”) on a bad album (Born Again). The unearthed Tupac stuff is worthwhile, if unevenly presented. J Dilla’s The Shining is a beautiful batch of beats. Bob Marley’s Confrontation was OK. Otis Redding put out four albums between his death in ‘67 and 1969. The best of them, 69’s Love Man, worked because they were touched up by longtime studio collaborator Steve Cropper.

6) 2001’s Invincible and what that late career album taught us about Jackson’s pop instincts.

It was a lot of starting and stopping. Like, we would stop for three months and then Michael would be like, “I got to go to Germany for a couple months,” then he’d go to LA, it was that kind of situation. And I remember one time, he was like, “Let’s start from scratch…I think we can beat everything we did.” That was his perfectionist side. I was like “Man, we been working for a year, we gone scrap everything?!” But it showed how hard he goes.

It was music for defrosting a Bertolli dinner.

Akon and MJ hung out in shopping malls and recorded music together. It wasn’t good.

More importantly, Akon had remained steadfast in his resolve to let his unfinished MJ collaborations rest in peace, telling MTV News in 2010 not to expect much because, “They’re just ideas, concepts, and harmonies that the world will probably never see… We’ve done plenty of records outside of this, but they were just incomplete… I might just burn [them] after this interview.”

His tune has changed.

“I’m definitely committed to putting out an album before the end of the year,” Akon told Idolator this month. “It’s goin’ out. I’ll be able to give you the exact dates very soon, but I have a huge plan on how I’m going to release it.”

I can’t blame Akon or Timbaland for cashing checks. The music industry can’t sell records outside of a short list of blue bloods. The Beatles still outsold the world this past decade. Listen to the Michael stuff if you’re curious, but remember that the Tupac hologram has more soul than these recordings.