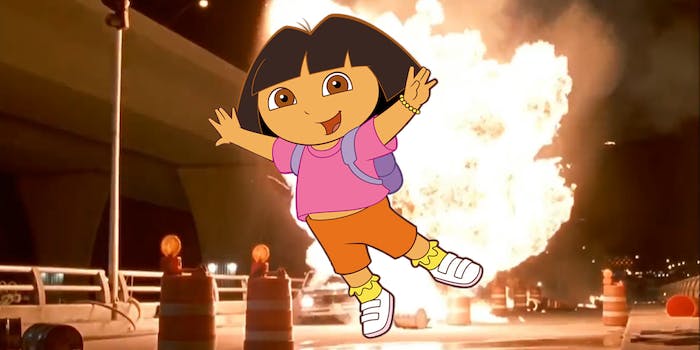 Transformers director Michael Bay has signed on to produce a live-action interpretation of longtime Nick Jr. staple Dora the Explorer.

The original series stars a cartoon 7-year-old who goes on educational adventures Sesame Street-style, but the movie update will star living actors and feature a more grown-up Dora. Most of the story details are still under wraps, but here’s what we know so far: the Hollywood Reporter says the movie will “center on a teenage Dora, who moves to the city to live with her cousin Diego” (aka the star of spinoff series Go Diego Go). Director of The Muppets and Neighbors Nick Stoller has been recruited to write the script.

The choice to hire Bay, whose movies typically revolve less around plot than they do expensive-looking special effects, suggests Dora’s new adventures might be a little bigger and grittier than we’re used to. It seems fair to expect less “Can you spot the pond on this map?” and more “Where’s my parachute?”

The project has reportedly been in the works since 2015 but lost steam while trying to nail down a director. With Bay on board, though, it seems like things are back on track.

Now someone just needs to make a bingo card for how many canon Bay images we can expect to see in Dora’s universe. Every time an American-made vehicle slow-motion spins through the air before crashing and exploding in HD, an angel gets its wings.