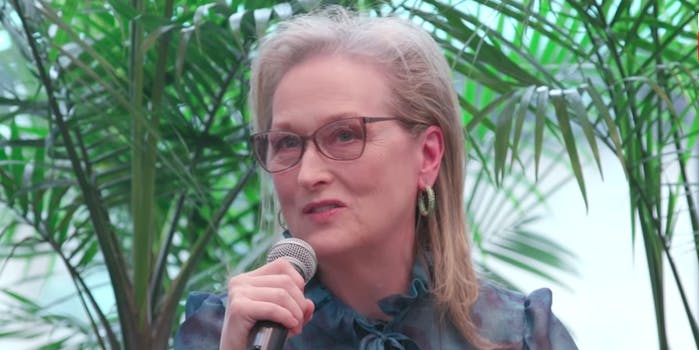 At a BuzzFeed News panel to promote her latest film The Post, actress Meryl Streep took the reigns when questions of women’s equality in Hollywood were at the forefront of the discussion.

Referring to allegations of sexual assault against Harvey Weinstein and a slew of powerful men in the industry, Streep said that if more women were on company boards, the “shenanigans wouldn’t have occurred.”

The “shenanigans” include the toleration of inappropriate behavior surrounding the industry for years.

“If the boards of the company were half female, there wouldn’t ever have been payoffs to anybody,” Streep said.

The actress also said she believes there should be 50/50 representation of men and women at the highest level of industries because that’s the decision-making level where “everything filters down from.”

“Right now, there are a lot of opportunities in at the bottom [for women], and then you get up to the middle level of management. But at the top level the same rules generally adhere, where we are at 17-20 percent of the boards of pretty much anything,” Streep said.

She added that she still experiences gender bias in her career.

Streep was joined at the panel by her co-star Tom Hanks and director Steven Spielberg. The conversation, initially geared toward promoting their new film, was not far off-topic from the plot of The Post.

Streep and Hanks play publisher Katharine Graham and editor-in-chief Ben Bradlee, who worked together on the tough decision of publishing the Pentagon Papers in the Washington Post in the 1970s. Streep mentioned that at the time Graham took this high position at the paper, women were thought of as “lesser creatures,” which the actress said is still “slightly true” today.