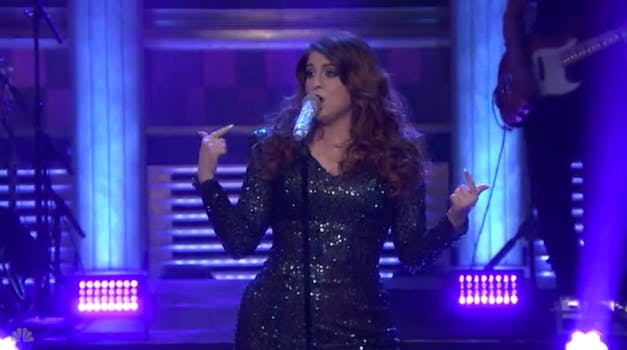 She couldn't catch her balance after that final turn.

No matter how much you practice, sometimes you just can’t stop a slip during a performance—a lesson Meghan Trainor just learned first-hand.

Trainor performed on The Tonight Show Thursday night just as her second album, Thank You, was about to drop on digital platforms. For nearly four minutes, the show went off without a hitch. But as she turned at the end of her song, her foot landed in an odd place and there wasn’t a mic stand in the world that could have prevented her from falling over.

Ever the good sport, Jimmy Fallon joins her on the floor to make sure she was OK.

When asked by fans later, Trainor brushed it off, telling them that she didn’t get a scratch and she didn’t feel anything until hours after the fall.

Haha I didn't feel it till hours later . I'm all good tho. Barely a scratch https://t.co/kVMiCxFJnM