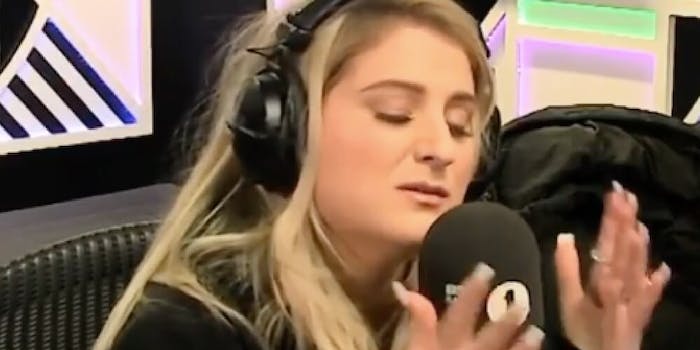 If you’ve ever listened to Billie Eilish’s “Bad Guy” and thought to yourself, “Gee, I really love this, but I wish it had the words to Meghan Trainor‘s ‘All About That Bass’ playing over it instead,” it’s your lucky day! (Duh.)

Trainor popped in to chat with the guys at BBC Radio 1 earlier this week and decided to give us all a little treat by singing her 2014 hit single while the music track for “Bad Guy” played underneath it.

And it was actually pretty great.

“That messes with my mind,” BBC Radio 1 tweeted out after the interview. “Meghan Trainor sang ‘All About That Bass’ to the tune of ‘Bad Guy’ by Billie Eilish and she absolutely smashed it.”

“This is a f*cking bop,” Trainor declared. “I left all of you guys for a moment. I was like, why is this my favorite song?”

Trainor isn’t the only one entranced by her own musical stylings (ft. Eilish). The clip is making the rounds, as everyone imagines the alternate universe in which Trainor and Eilish share a really intimate musical space.

“I need the studio version of this ASAP,” Twitter user @casbrittney wrote, a sentiment quickly echoed by plenty of other fans.

Is there a proper Trainor/Eilish collab on the horizon? Or maybe a universe in which Trainor tries singing all of her songs over Eilish’s songs? Either way, we’re hoping Eilish responds, preferably with a song of her own. We can literally never have too many remixes!