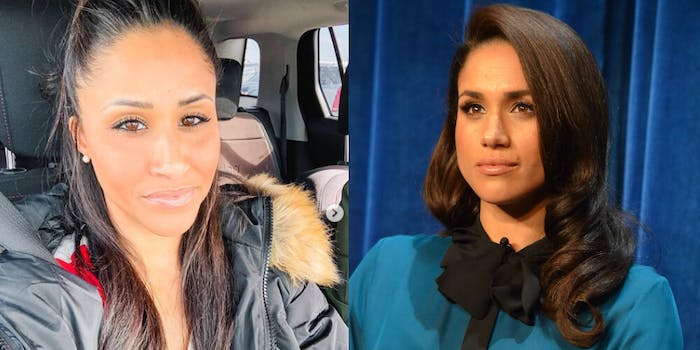 'I'm always up for filling in for her as her doppelgänger if she doesn't want to go to any of the events she's invited to.'

Meghan Markle has a lookalike on Instagram, and a lot of people are starting to take notice.

Akeisha Land, a mom who started an Instagram account to share photos of her adorable children–Greyson and Tristan, is now going viral for her uncanny resemblance to the Duchess of Sussex.

People started pointing out the resemblance after Land posted a photo of herself with daughter Greyson, a deviation from her usual posts of just her kids. The photo has so far racked up more than 15,000 likes and hundreds of comments.

“I think you are cousins with Duchess of Sussex,” Instagram commenter @Parluzee theorized.

In fact, the majority of the comments are directed at Land and are about her resemblance to Markle.

Another included the hashtag “#Royalmama.”

For quite some time, the profile was littered with photos of Greyson who appeared to be the most popular member of her family–until now. According to a caption on one of her other posts, Land certainly wasn’t expecting all of the attention.

“Wonder why you’re seeing my face and not Bitty’s?” the mom wrote in another Instagram post. “I know you’d rather see her cute face, but I had to make a brief cameo to say, CHIEFSSSSSSS!!”

Land told the Daily Mail that people tend to say she looks like Markle both on- and offline, and she is flattered by the comparison–even if she doesn’t necessarily see the resemblance herself.

“Even my close friends and family say I look like her! And even though I myself don’t see the similarities, I definitely take it as a huge compliment as she’s just drop-dead gorgeous,” she said.

She even offered to fill-in for Markle if the royal wants to skip out on a few outings.

“I always joke and say I need to have someone reach out to her people to let them know I’m always up for filling in for her as her doppelgänger if she doesn’t want to go to any of the events she’s invited to,” she added.