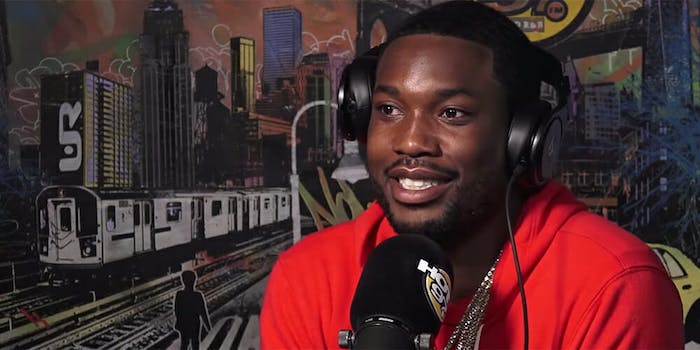 He rang the Sixers' ceremonial bell.

Rapper Meek Mill was released from prison on Tuesday to much fanfare, excitement, and a winning Philadelphia 76ers game.

Variety reported that Meek was let out on bail after a ruling from Pennsylvania’s highest court. He was driven straight from prison to a parking lot where he was swept into a helicopter with his friend, Sixers co-owner Michael Grubin, to fly to the team’s fifth game of the NBA playoffs at Wells Fargo Arena.

@meekmill is FREE!!! Just left visiting Meek with @kevinhart4real and I’m on the way back to pick him up as we speak! #MeekisFree #GoSixers

On the way to the sixers game let’s go!!!! #meekfree

Meek made it to the game in time to greet players and ring the ceremonial bell, according to social media posts.

Meek Mill rings the bell for the 76ers. pic.twitter.com/T0fJrtS5KR

Philadelphia’s assistant district attorney and Meek’s lawyers had been calling for the Wins & Losses rapper’s release from jail due to “questions about the credibility” of the arresting officer in his case.

There has been widespread support and calls to free Meek, who in November was sentenced to two to four years in prison for violating probation, from people who say his prison sentence was “unjust” and yet another example of double standards the justice system imposes on Black men.