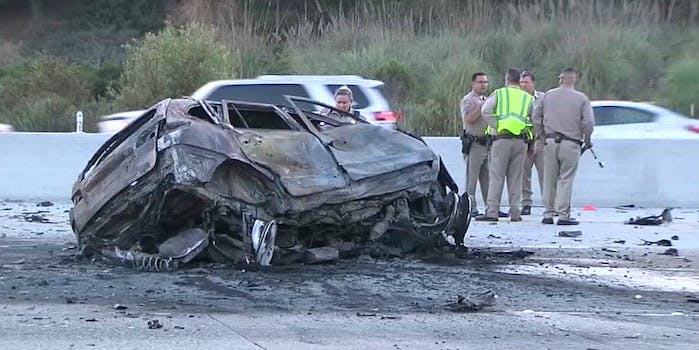 An autopsy report shows that Heitmann had neither alcohol nor drugs in his system.

The parents of the 18-year-old popular YouTuber “McSkillet” told authorities he was suffering from a manic meltdown shortly before he drove his McLaren sports car into oncoming traffic and caused a fatal crash, killing himself, a 43-year-old woman, and her 12-year-old daughter in August, according to BuzzFeed.

A report released Friday by the San Diego medical examiner’s office shows that Trevor Heitmann, known as “McSkillet” on his YouTube channel, told his parents he was experiencing a “breakdown” before aggressively driving away from their house and toward the northbound Interstate 805 in University City, California.

Heitmann was known for posting videos of gameplay from Counter-Strike: Global Offensive (known colloquially as CS:GO) and discussing the in-game cosmetic items that changed the appearance of weapons and gloves. His channel has 873,000 subscribers as of this writing.

According to Heitmann’s mother, the 18-year-old’s behavior had changed dramatically only a few days before the crash. She said he told her that he had driven his McLaren 150mph down the wrong side of a 25mph road. When Heitmann’s mother told him he couldn’t do that, she says he responded “I can do it.”

Heitmann’s father also says his son told him that “neither the police nor the bullets could hurt” him, according to the same report.

Just hearing all this shit about @OG_McSkillet and not really sure what to think. I don't have all the details so I won't comment on the specifics but Made a video with him back in the day and he was a nice kid.

Heitmann’s parents say his behavior concerned them so much that they contacted the police, but were told that no action could be taken until an actual law was broken. Heitmann’s parents say that their son told them he was having a “breakdown” before taking a four-hour nap in his room, then getting up and telling them he “had to go.” When Heitmann’s father attempted to stop him by blocking the exit with his own car, Heitmann rammed through with his McLaren until he could get out and drove away.

California Highway Patrol footage shows that Heitmann did not attempt to swerve out of the way of the SUV carrying 43-year-old Aileen Pizarro and her 12-year-old daughter Aryana. All three were killed in the ensuing crash, and firefighters were forced to put out the blaze. The accident caused a string of crashes involving five other cars, injuring one person.

Heitmann’s parents told authorities that he had no official history of mental illness, depression, or suicidal thoughts. No suicide note has been found, and an autopsy did not produce any results for alcohol or drugs in Heitmann’s body.

Heitmann had posted a video of his McLaren to his YouTube channel 10 months ago. The family of Aileen and Aryana Pizarro set up a GoFundMe following their deaths to help with funeral costs and other expenses. It has raised over $67,000.