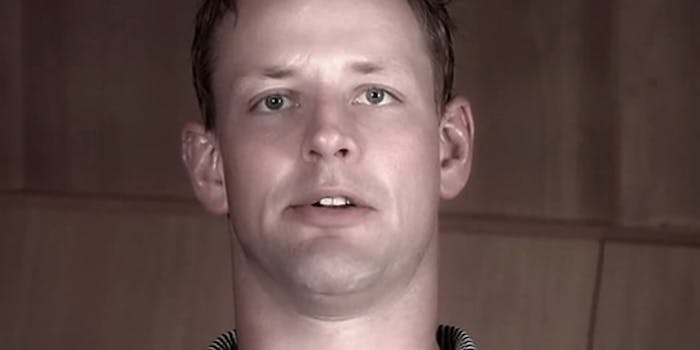 “It shouldn’t take courage to go into your own locker room,” Hendricks said.

NHL player Matt Hendricks released a video Tuesday in support of You Can Play, an organization dedicated to combating homophobia in sports.

“Hockey takes courage,” said Hendricks. “It takes courage to block a shot, pay the price in the corner, or to fight for your teammates.”

“It shouldn’t take courage to go into your own locker room,” he said, adding that it’s time to end “casual homophobia in our arenas.”

The video is the first one for the (possibly) upcoming NHL season, which is scheduled to start in October.  Within hours of the video’s publication, fans began to show support for Hendricks’s words on Twitter.

You Can Play released its first PSA last March, featuring organization cofounder and Philadelphia Flyers scout Patrick Burke, and his father, Brian Burke, who is the Toronto Maple Leafs’ general manager. That well-received video racked up more than 215,000 views on YouTube.

Patrick’s younger brother, Brendan, grabbed headlines for being an openly gay equipment manager for the Miami of Ohio hockey team in 2009. Brendan died in 2010 in a car accident, but the organization aims to continue his message of wiping out homophobia in sports.