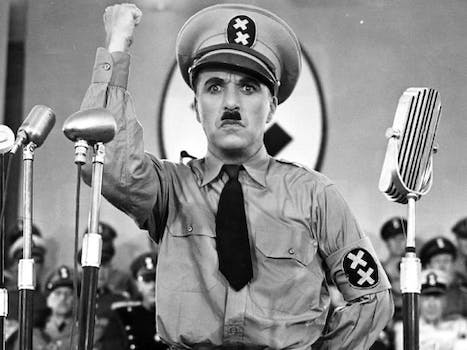 Charlie Chaplin's speech from "The Great Dictator" gets an autotuned re-re-remix via Anonymous.

Start your week right with the Daily Dot’s Morning Mashup, the best music remix from around the Web. Turn up your speakers or pop on your headphones, and bring the funk.

Seventy-three years ago, Charlie Chaplin wrote and then gave what has come to be known as one of the greatest political speeches ever made, in his film The Great Dictator. He delivered it on budget and in front of a blasé camera crew, on a hot Hollywood set where the great dictators were producers and directors, not Führers. As one of the United Artist studio founders, Chaplin was by default all three; nonetheless, his repudiation of dictatorial authoritarianism rings true, as true now as it has been for all the war-torn generations between 1940 and today.

Chaplin reportedly prepared for the film by watching Leni Reifenstahl’s Nazi propaganda film Triumph of the Will repeatedly, laughing as if it were the funniest thing he’d ever seen. Then he sat down and wrote his first real talkie, his most profitable film, and the one which has inspired perhaps more mashups in the past two years than any other segment of celluloid (Star Trek, as always, excluded).

The original Great Dictator speech, uploaded to YouTube in June of 2006, has had 4.7 million views. Since that time, it’s been used as the basis for countless mashups, each one posted and re-posted and passed around activist circles with a sometimes cavalier approach to attribution, making the original source of any particular mashup difficult to trace.

This version, from May 2007, mashes up the speech with “Time” from Hans Zimmer’s soundtrack for Inception, which lends it an appropriate ominousness. Adopted and passed around later that year by Anonymous and Occupy, it has garnered a very impressive 321,916 views. This essentially identical version from one month later has 219,248 of its own. Countless versions have been remixed with contemporary news footage and uploaded as “Message to Humanity,” gaining another few hundred Ks. You get the idea.

The creator of this latest version of the soundtrack is (if YouTube comments and dates don’t lie!) John D. Boswell, also known as Melodysheep, who was forced to take it off YouTube because of a copyright dispute. It lives on as Track 11 of his album Symphonies for the Soul on Bandcamp, uploaded on July 13, 2011. Only a master could successfully AutoTune one of the Great Speeches; we can only wonder what he’ll do with the St. Crispian’s Day bit from Henry V.

Driven to the end of his Guy Fawkes mask’s elastic by the current (and, if truth be told, eternal) drama among squabbling Anonymous members, AnonRoughCoitus has uploaded a new video accompaniment to the AutoTune masterpiece, and the new video mashup paired with the AutoTuned mashup from last year of the speech from the last century, is our choice for Mashup Monday. Full transcript of the speech is below the video.

Transcript of the speech:

I’m sorry but I don’t want to be an emperor. That’s not my business. I don’t want to rule or conquer anyone. I should like to help everyone if possible; Jew, Gentile, black men, white. We all want to help one another. Human beings are like that. We want to live by each other’s happiness, not by each other’s misery. We don’t want to hate and despise one another. In this world there is room for everyone. And the good earth is rich and can provide for everyone. The way of life can be free and beautiful, but we have lost the way.

Greed has poisoned men’s souls; has barricaded the world with hate; has goose-stepped us into misery and bloodshed. We have developed speed, but we have shut ourselves in. Machinery that gives abundance has left us in want. Our knowledge has made us cynical; our cleverness, hard and unkind. We think too much and feel too little. More than machinery we need humanity. More than cleverness, we need kindness and gentleness. Without these qualities, life will be violent and all will be lost. The aeroplane and the radio have brought us closer together. The very nature of these inventions cries out for the goodness in man; cries out for universal brotherhood; for the unity of us all.

Even now my voice is reaching millions throughout the world, millions of despairing men, women, and little children, victims of a system that makes men torture and imprison innocent people. To those who can hear me, I say “Do not despair.” The misery that is now upon us is but the passing of greed, the bitterness of men who fear the way of human progress. The hate of men will pass, and dictators die, and the power they took from the people will return to the people. And so long as men die, liberty will never perish.

Soldiers! Don’t give yourselves to brutes, men who despise you and enslave you; who regiment your lives, tell you what to do, what to think and what to feel! Who drill you, diet you, treat you like cattle, use you as cannon fodder! Don’t give yourselves to these unnatural men—machine men with machine minds and machine hearts! You are not machines! You are not cattle! You are men! You have a love of humanity in your hearts! You don’t hate! Only the unloved hate; the unloved and the unnatural.

Soldiers! Don’t fight for slavery! Fight for liberty! In the seventeenth chapter of St. Luke, it’s written, “the kingdom of God is within man,” not one man nor a group of men, but in all men! In you! You, the people, have the power, the power to create machines, the power to create happiness! You, the people, have the power to make this life free and beautiful, to make this life a wonderful adventure. Then in the name of democracy, let us use that power.

Let us all unite. Let us fight for a new world, a decent world that will give men a chance to work, that will give youth a future and old age a security. By the promise of these things, brutes have risen to power. But they lie! They do not fulfill their promise. They never will! Dictators free themselves but they enslave the people! Now let us fight to fulfill that promise! Let us fight to free the world! To do away with national barriers! To do away with greed, with hate and intolerance! Let us fight for a world of reason, a world where science and progress will lead to all men’s happiness.

Soldiers, in the name of democracy, let us all unite!

Screencap via Tracing My Life/Tumblr