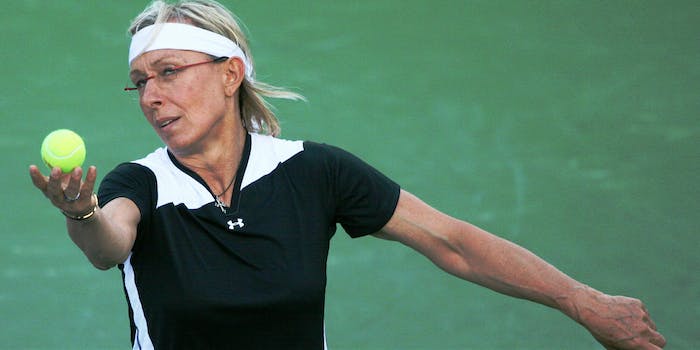 Last year, tennis champ Martina Navratilova joined fellow retired player John McEnroe as commentators for the BBC’s coverage of Wimbledon. Now, Navratilova is furious with the U.K. broadcasting corporation after finding out she made 10 times less than McEnroe for her work.

The controversy began after Navratilova came across the BBC’s list for broadcasters’ salaries for July 2017, where she reportedly saw McEnroe made £150,000 to £199,999 during his coverage. In comparison, Navratilova was paid a mere £15,000, SBS News reports. Navratilova took aim at the BBC as a result, claiming that McEnroe was “getting at least 10 times as much money” because the public venture is “still the good old boys’ network.”

“I get about £15,000 for Wimbledon and unless John McEnroe’s doing a whole bunch of stuff outside of Wimbledon he’s getting at least 10 times as much money than I am for very comparable work,” Navratilova told BBC Panaroma.

When one BBC reporter suggested that McEnroe received a higher pay than Navratilova for potentially doing more coverage, she fired back, suggesting his hours weren’t extremely higher than hers. This seems to be the case: The Guardian reports that McEnroe appeared “about 30 times for the BBC,” whereas Navratilova had 10 appearances.

“Ten times as much? I don’t think so,” she said during the interview. “We were told, yes, I was getting a comparable amount. So yeah, we were not told the truth. That’s for sure.”

For Navratilova, the alleged wage gap asks larger questions about whether women at the BBC and other broadcasting networks are being paid a fair wage for their work compared to men. From her perspective, that doesn’t seem to be the case. The public broadcasting corporation has since defended itself, with BBC Sports telling the Guardian that McEnroe has “a different scale, scope, and time commitment” that is “simply not comparable.”

“Along with Sue Barker, John is regarded as the face of our Wimbledon coverage,” one spokeswoman told the Guardian. “He is a defining voice within the BBC’s coverage. He is widely considered to be the best expert/commentator in the sport, highly valued by our audiences and his contract means he cannot work for another U.K. broadcaster without our permission. His pay reflects all of this—gender isn’t a factor.”

Fittingly, the last time McEnroe made headlines was over his sexist remarks about Serena Williams’ tennis career, arguing that she would be “like 700 in the world” if she “played the men’s circuit.” Two days later, Williams unveiled her pregnant photoshoot for Vanity Fair, drowning out McEnroe’s comments.