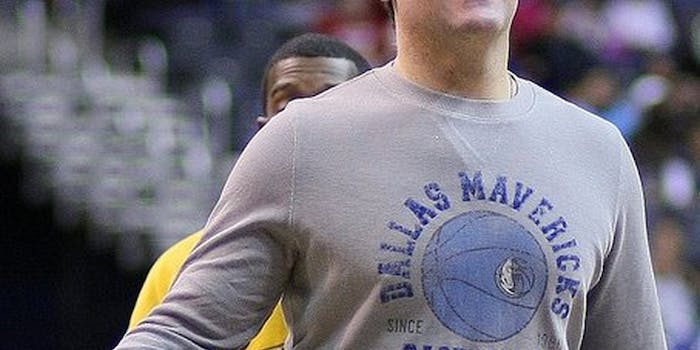 What’s on the left, Mark Cuban?

Mark Cuban almost certainly has more money than you. He probably has more Twitter followers, too. Yet that doesn’t stop the Dallas Mavericks owner from tweeting an odd statement from time to time.

“Its on the left,” the billionaire tweeted on Tuesday night. He hasn’t tweeted since, aside from one unrelated response to another tweet.

The unusual, contextless tweet led to some funny replies from Cuban’s followers.

“My left or your left?” queried Chrys Athanasakos.

“There’s a bathroom on the right,” claimed Mike Higgins.

“I was looking for it. Thanks,” tweeted a relieved Emily Cates.

On a similar theme, SleazyE wrote, “You found my remote! Thanks Mark!”

One theory: Cuban’s tweet was a failed response to a direct message, or a DM fail. Such a misdirected reply led to former Congressman Anthony Weiner’s downfall—though Cuban’s message wasn’t nearly as racy.

However, the tweet indicates that Cuban sent it via Twitter’s client for Android smartphones. Most DM fails occur when a Twitter user responds directly via text message, accidentally broadcasting a private reply.

With the questionable grammar and absence of context, maybe Cuban was doing an impersonation of infamous Twitter spambot @horse_ebooks.

It’s not a case of him having more money than sense. Cuban’s a smart guy, as evidenced in his rant against patent law after Yahoo sued Facebook over social-networking patents.

We don’t quite know what Cuban’s tweet is about or what led him to post it. However, after doing a little background research, I have a hypothesis: Cuban is still shaken up from that time WWE superstar Sheamus slammed him through a table.