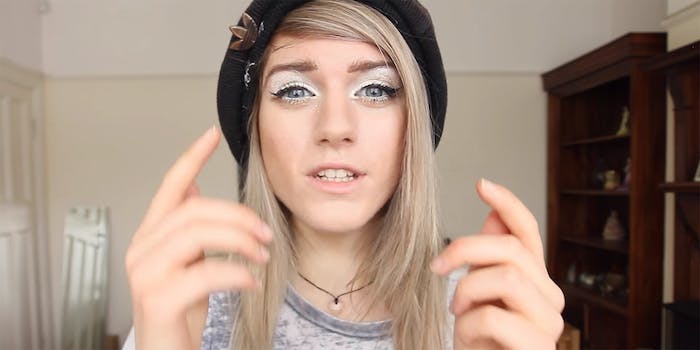 Police confirmed that Marina Joyce, a 19-year-old British fashion and beauty YouTuber, is safe after her fans expressed concern over her welfare in the wake of recent videos and sparked a worldwide trending hashtag late Tuesday.

Joyce posts tutorials, fashion videos, challenges, and Q&As for her more than 700,000 subscribers, but some of them recently began to worry about her safety after a series of recent videos. They cited the recent presence of a gun on Joyce’s nightstand (though some say it’s been there since 2012), bruises on her body, and the presence of a man behind the camera. Some began to suspect that her boyfriend or someone else had taken control of her channel, and in a recent video some allege that you can hear Joyce faintly say “help me” in two instances.

On a makeup tutorial video, a fan asked Joyce if she was OK, and while Joyce initially responded “yes,” she replied with “no” underneath it. The comment was later deleted.

JustPaste.It has a more comprehensive breakdown of recent incidents some fans found troubling.

Tuesday night, Joyce tweeted about an upcoming meetup, something many content creators attend as a chance for their fans to hang out with them off the screen.

if you want to PARTTEEEYY with me? ;) <3
tweet me now if you wanna party with me :D ill put details out for where to meet soon for the day

Meet me Bethnal Green at 6:30am if you would like to join partying with me at that event ^-^ bring a friend so you dont get lost

But the early meetup time of 6:30am worried people, and even fellow YouTubers advised against attending. According to the Mirror, some fans worried that Joyce had been kidnapped by ISIS.

Please do not go to Marinas meet up! Stay well clear and do not got to this meet up. Let police handle this.

Please please do not attend @MarinaJoyce7's meet up tomorrow morning. I'd hate for anyone to be in danger #savemarinajoyce x

#SaveMarinaJoyce began to trend worldwide on Twitter. For her part, Joyce liked tweets that said she wasn’t OK. Some fans even contacted police to check on her.

For those who don't know what is going on #savemarinajoyce pic.twitter.com/u8dEaFkhDE

The Enfield Borough Metropolitan Police Service later confirmed that it had checked on Joyce, who eventually put out a message to her fans that she was fine. Joyce planned a livestream on YouNow later to chat with them.

Im TOTALLY fine guys, i am feeling very good today and its actually so heartwarming to see so many people care about me

Im going to do a Live Stream today on Younow if you guys want to watch at some point today, probably around 12/1pm <3

But that hasn’t convinced some fans. Some instances of trolling appeared in the hashtag, but others pointed to instances in the livestream when she appeared scared or abruptly changed the subject.

she changed the subject when someone asked about her chains.. #savemarinajoyce https://t.co/vyWRYJDpgf

she really cant be okay.. look how scared she looked :( #savemarinajoyce pic.twitter.com/xSWSNhZkeD