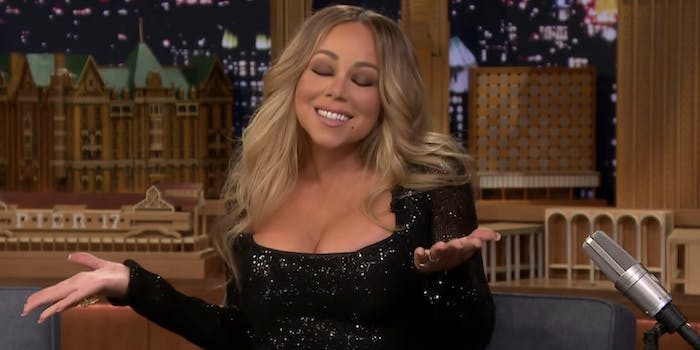 #JusticeforGlitter means something different in the U.K.

Carey’s eighth studio album Glitter accompanies a 2001 film of the same name. The album didn’t do well for a number of reasons, including its release on September 11, 2001, according to Billboard. Last month, a fan-led campaign to encourage appreciation for the album used the hashtag #JusticeforGlitter.

Let’s take a moment, please. @MariahCarey has NOT ONE, but TWO ALBUMS in the top ten, OKAY. #MariahCaution #JusticeForGlitter pic.twitter.com/kXVKEterwB

I have to dedicate today's #tbt to Glitter, which is currently #1 on the iTunes albums chart, 17 years after its release and on the eve of my new album release! My fans are THE BEST 💖💖💖 #JusticeForGlitter!! LET'S GO #CAUTION⚠️ pic.twitter.com/i2v8Zkp1oy

Carey’s fans, however, unknowingly made an epic error in judgement. As indy100 reports, the hashtag evoked a different meaning for United Kingdom users who thought the phrase about Gary Glitter, a rock artist who grew to fame in the 1970s and ’80s.

Glitter was charged for a number of offenses, including child pornography and having sex with an underaged girl, who was 14 at the time. In 2015, Gary was sentenced to 16 years in prison for sexual abuse that occurred between 1975 and 1980.

In a recent interview, Carey said that the effort by her fans restored her confidence in Glitter, which was her worst selling studio album to date.

“Since the Lamb got ‘Glitter’ to number one, they’ve lifted this huge burden of having to feel like, ‘oh I can’t do stuff from “Glitter” because nobody knows it or whatever,” Carey told Andy Cohen.

Glitter is currently in the top 10 albums on Apple Music, alongside Carey’s 2018 release, Caution.