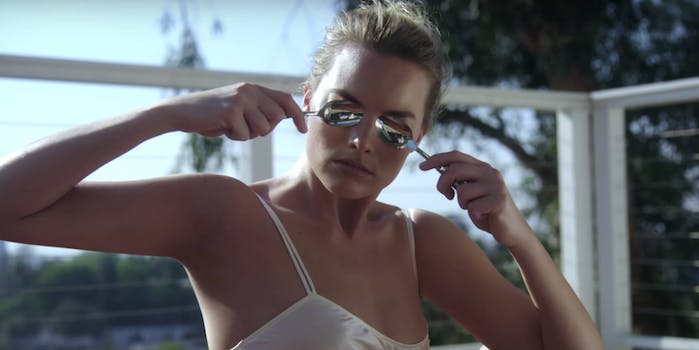 'There is an idea of a Margot Robbie.'

In the 2000 film adaptation of American Psycho, rich, handsome maniac Patrick Bateman (played by Christian Bale) walks us through his dead-eyed morning beauty routine. As he peels off his face mask, he reveals: “There is an idea of a Patrick Bateman, some kind of abstraction, but there is no real me.”

Working on this premise, Ariel Schulman and Henry Joost (Paranormal Activity 3 and 4) reshot the opening scene with Margot Robbie for Vogue, dubbing it Australian Psycho. The Suicide Squad actor gazes at a Hamilton poster as she pees, and relates that even though she was “born with a six pack,” she still likes to work on her core. It also subtly underscores the ridiculous number of beauty products available to help women look younger and more appealing.

Last week Robbie expressed an interest in roles that focus on women and how they move the story forward, rather than how they drive a male character’s story. Coincidentally, this week it was reported that Robbie will star in her own Harley Quinn movie, which will also feature a cast of female DC characters.

Can’t help but wonder what this bit would have been like with Harley Quinn and a placenta mask.