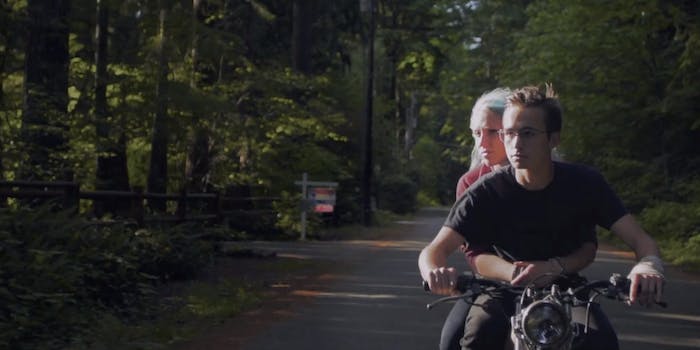 Marcus Haney’s work transcends the timeliness and grim opportunity of the moment.

Filmmaker Marcus Haney already had a strong music video in his back pocket when a campus shooting interrupted his production schedule.

Haney was in Seattle during a four-day window helping his brother’s friends’ band—modern folk-mongers Bear’s Den—forge a music video for single “Elysium.” His angle was following awkward kids with conservative and religious backgrounds as they come of age, specifically as newcomers to Christian liberal arts school Seattle Pacific University. The kids were smoking cigarettes, crushing beer cans, and reacting to living independently.

Unfortunately, fellow student Aaron Ybarra had access to eight guns, including semi-automatic rifles, and on June 5, during Haney’s filming, Ybarra fired on three students with a shotgun, killing 19-year-old Paul Lee. Lee had been a friend of Haney’s subjects, and the video’s narrow thematic focus was suddenly tasked with somehow working in a macro, contextual lens that was simultaneously profound and appropriate.

“I was caught between doing right by a tiny band who didn’t have the money to make another music video,” Haney told Noisey,  “and ensuring I made something that was respectful to Paul’s family, and which, of course, also did right by Paul himself.”

Haney’s work transcends the timeliness and grim opportunity of the moment. It’s alternative, almost ’80s-era punk kids lighting fires in the forest, and there are intercut moments of joy—riding dirt bikes, skateboarding, kissing in hallways. But there’s burdened sadness, too: a skater smashing his board, two kids fighting, freshly branded and home-crafted tattoos, lots of reactionary consoling.

“The stuff we were filming kind of turned into an outlet for the kids. It was kind of like they were dealing with the situation on camera, releasing a lot of their anxieties—say like in the plate smashing scene. All the kids’ reactions you see on the video are real,” Haney says.

As a skilled documentarian, Haney was able to float behind the scenes and capture the news. But he tells Noisey the tragedy caught up with him when he spoke candidly to his brother at the end of the shoot.

“He tells me that, on the day of the shooting, he was scheduled to be in the lobby of that building at the exact time of the event, selling yearbooks for two hours in precisely the same spot in the room where the event took place. And the only reason he wasn’t there, selling yearbooks, is because he’d gotten out of it in advance, knowing that on that day he’d be picking me up from the airport for the shoot.”