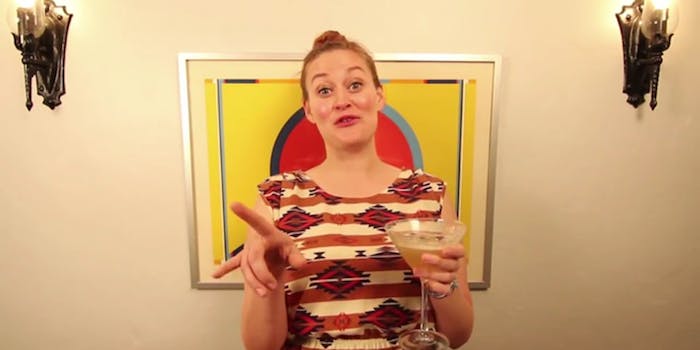 The life and cocktails of Mamrie Hart will be published in 2015.

It was announced on Tuesday that YouTube’s resident booze enthusiast Mamrie Hart has landed a book deal based in part on her popular weekly Web series, You Deserve a Drink.

Video Ink reported she will pair up with Plume Books, an arm of Penguin Random House, to publish a memoir, which will also include cocktail recipes that correspond to her stories. Via email, Hart explained a bit more about the memoir/cocktail approach:

“Each chapter will have its own recipe, so in an ideal world, when you are reading about that time I fell in love with the the half-snake, half-man guy and ran off with him to work in the carnival for a summer, you will make the cotton candy martini to drink while you read. Side note: That isn’t actually one of my stories. The half-snake, half-man guy was way too good for me.”

She adds that she’s wanted to do a cocktail book with anecdotes for a little over a year now, but then it was expanded to focus more on her “drunken adventures and bizarre stories.” She can’t reveal everything that what was in her pitch chapters, but hints that her obsession with infomercials was part of it.
Hart most recently wrote the screenplay for and starred in Camp Takota — a feature-length film based on her real-life experiences as a summer camp counselor — with fellow YouTube friends Grace Helbig and Hannah Hart. Telling stories is one of her strengths, especially when it involves booze and puns. The book will be published in summer 2015, and is rumored to involve some fan input as well. She says she’s “still working on creative ways to do that, since my idea to just straight up Truman Show me looking blankly at my laptop while overcaffeinating was turned down.”