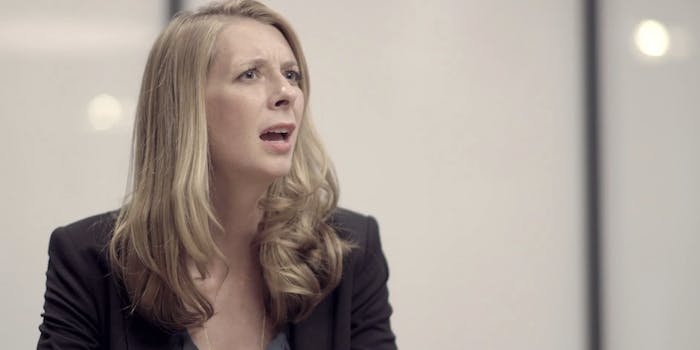 Anyone who’s ever taken a peek at the bottom of an eye shadow case, or sought a new tinted moisturizer, knows that makeup names can be downright absurd. The sheer volume of bizarre and provocative makeup names abound is enough to make your head spin.

What exactly is going on in those marketing meetings where companies dream up new makeup names?

A new video from UCB Comedy written by Anna Rubanova, one of the creators of the Left Handed Radio sketch comedy podcast, takes us behind the company doors and dares to ask, what happens once you realize all the makeup names are taken?

Rubanova’s hilarious, absurdist writing uses classic wordplay: suggested names include “Like What” and “Did That,” but, spoiler alert, they’re taken. The meeting zips along at a frenetic pace and the names they blow through will have beauty fans chuckling out loud.

But, warning, the name they finally come up with is so funny it might make your head explode.

For more of Rubanova’s wacky brand of humor, check out, this episode of Above Average series Podtoons, which Rubanova EPs.

Update 12:43am CT, Jan. 13: An early headline for this piece misstated the product central to the sketch. The sketch is about eye shadow.