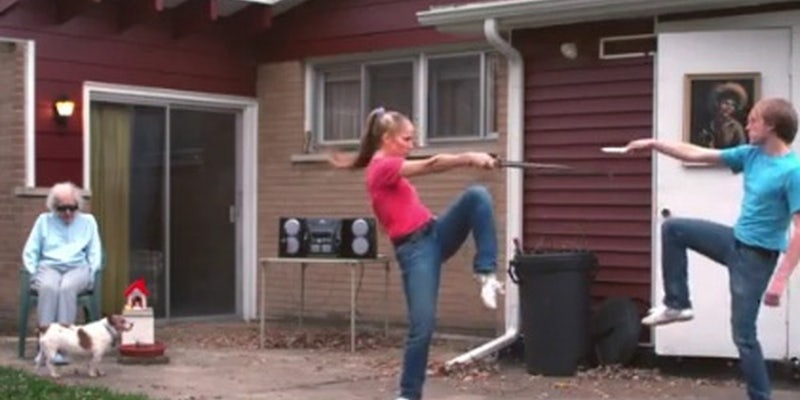 Wherein the mystery of "Jian Sword Dancing" is finally revealed. Sort of.

In YouTube Right Now, the Daily Dot looks at videos that catch our eyes, push our buttons, or move the dials—and that you have to watch. Right now.

About a month ago, “Jian Sword Dancing,” a video featuring a young woman and presumably her brother doing exactly that, rocked the Internet’s metaphorical boat.

It turns out that clip, and other related videos on that channel, were part of DJ team Major Lazer’s latest music video, “Original Don,” featuring fellow DJs the Partysquad.

The teaser clips were uploaded onto temperature3, the YouTube channel of one Kyle Frere, roughly four months ago.

“My primary objective is to create movies my 15-year-old self would find hilarious,” Frere wrote in his bio on Vimeo, another video website.

(It is unclear if Diplo, the mega-producer behind Major Lazer, approached the original video makers, or if they were in cahoots the whole time.)

The clips exude a ‘90s nostalgia currently sweeping the digital masses and had both Reddit and YouTube going wild with glee. Redditor Luckyscs called it a ‘hidden gem of Internet folk art.” YouTuber dadavedave added in a channel comment: “wow! seriously, you can’t make this stuff up. Everything is just perfect, weird and﻿ beautiful! please make a﻿ movie … the world would be a better place!”

So how are YouTubers liking the Major Lazer video? Apparently, the original teaser was better.

“I’m digging the new Major﻿ Lazer video but I still think this one is the greatest 1:23 in the universe” wrote thisisawakeupcall on the teaser. (1:23 is the timestamp of the video and in Internet slang means “I agree.”)

In a phone interview with the Daily Dot this afternoon, Frere explained that Diplo actually approached him after viewing his “Jian Sword Dancing” video. Frere was given full control over the music video, including treatment and crew.  As for working with Diplo? Frere described him as “cool” and “pretty laidback.”

The third video on Frere’s channel features Diplo speaking with Frere’s great-aunt Carol, and is the only real “teaser” to the music video.