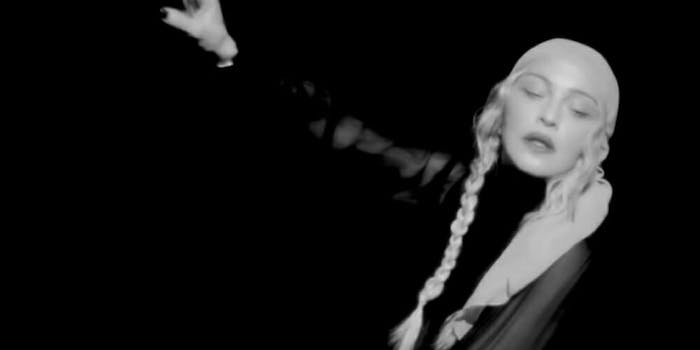 Madonna said she wrote 'I Rise' to give a voice to marginalized people.

“Us kids don’t know what we’re talking about, that we’re too young to understand how the government works. We call BS,” González can be heard saying at the beginning of Madonna’s new song, titled “I Rise.”

New Madonna single I Rise is excellent. And amazing to hear a fired up Emma Gonzalez on it.

“I Rise” also contains lyrics about gun violence. “There’s nothing you can do to me that hasn’t been done. Not bulletproof, should have run from a gun,” Madonna sings at one point in the song.

Madonna said she wrote the song to give a voice to marginalized people and released the song to mark the upcoming anniversary of the Stonewall Riots.

“I wrote ‘I Rise’ as a way of giving a voice to all marginalized people who feel they don’t have the opportunity to speak their mind,” Madonna said in a statement, according to the A.V. Club. “This year is the 50th anniversary of Pride and I hope this song encourages all individuals to be who they are, to speak their minds and to love themselves.”

Madonna is set to be honored with the Advocate for Change Award at the GLAAD Media Awards on Saturday.

González gave an impassioned speech advocating for gun control at the Florida March for Our Lives event in 2018. Several of the Parkland teen survivors organized the worldwide march following the Stoneman Douglas High School shooting.

A gunman killed 17 people at the high school in Parkland, Florida, in February 2018. Shortly after, several of the surviving students, including González, became activists and household names.

Madame X will be Madonna’s first since the release of Rebel Heart in 2015.

“Medellín,” featuring Maluma, was the first single to be released from the album. Maluma and Madonna, along with four digitized Madonnas, performed the song at 2019’s Billboard Music Awards on Wednesday.

Madame X is slated to drop on June 14 and will have features from Diplo, Quavo, and Swae Lee.