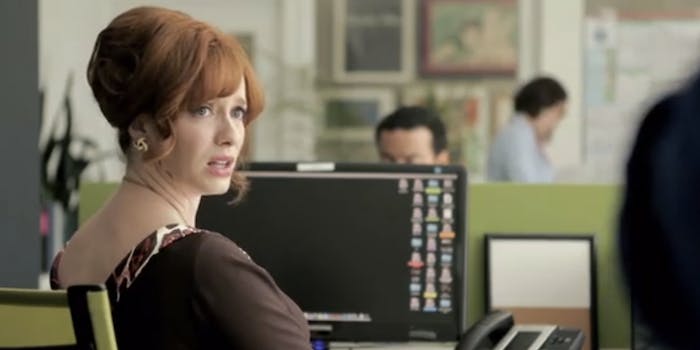 Welcome to the modern office, where the wage gap still exists.

The phrase “dying is easy, comedy is hard” has never been more applicable than in the latest Funny or Die video.

Using anachronisms and clever sight gags—not to mention to superb talents of Mad Men’s Christina Hendricks—this standout two-minute bit cleverly weaves comedic and political themes together to deliver a perfect punchline regarding the sad state of income inequality for women in the workplace.

Hendricks, channeling her Mad Men character Joan Harris, starts a new job in a modern office but brings with her a ‘60s sensibility which includes a lack of familiarity with fax machines and smartphones. Bringing Jell-O for lunch, followed by a martini chaser, takes it one step closer to over the top.

Funny or Die has been weighing in heavily on the issue of the minimum wage, as seen in Kristen Bell’s recent sendup of Mary Poppins. What’s next? Perhaps James Franco working at a car wash.