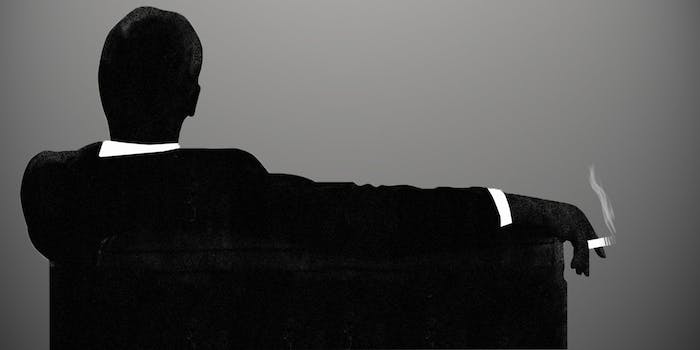 7 ‘Mad Men’ conspiracy theories fans should be nervous about

This is not a show for people who want fluid, logical action.

After seven seasons, AMC’s Mad Men arrives at its final subway station Sunday night with all the momentum of a customer service representative who just got off work. The ratings are down, the hardware is going to plot-driven series, and those of us who stuck around during all the emergency meditating aren’t here for rabbit-in-a-hat big bangs.

The cable menu description is reassuringly useless for Sunday’s season 7 premiere: “Don tries to track down a friend; Joan struggles to solve a problem with an account; Peggy is set up by an unlikely person.”

AMC split season 7 into two, seven-episode arcs so that it could avoid losing to Breaking Bad on Emmy night. You’ll remember that after the first seven episodes, Don Draper muscled his way back atop the advertising mountain—back from career-threatening alcoholism, warding off new, non-believing executives—just as we put a man on the moon.

Now comes the banal nature of fat-and-happy existence. There are no thrones to play musical chairs with, no dragons to slay. As TV critic Andy Greenwald wrote this week:

“[T]his is no different from the big questions that blink like warning lights atop our own lives: How will we live? When will we die? Can we ever find a way to be happy on our own terms? It’s a very contemporary notion, this idea that prestige TV series all have one core story to tell. It’s the sort of framework that makes sense for expertly constructed diving bells like Breaking Bad or the new breed of limited series like True Detective and Fargo, but not something as intentionally digressive as Mad Men.”

The halls of Sterling Cooper & Partners are empty and cold. As an unraveling, richly constructed universe drops its last run, the Reddit threads are still in a frenzy with conspiracies and searching for subtext. In fact, some of the series’ best predictions have stemmed from standalone pondering. Embarking on this final bundle of episodes, here are the seven most important to consider—to pair with the granular nuggets that the nerds love to share.

Despite the career win, the first half of season 7 ends with Don hallucinating as his deceased mentor, Bert Cooper—a shrewd, heroically rational partner—song-and-dances through “The Best Things in Life Are Free” from the 1927 musical Good News. It’s a nod to actor Robert Morse’s musical theater legacy, sure, but it’s also contextually skin-crawling. Don Draper is an unfashionable costume by 1969, and the musical number finds him cheek-to-cheek with his mortality.

As the Village Voice notes, tonight’s episode, “Severance,” will find Don “stuck in a hamster-wheel of hedonism.” He’s made peace with Sally, Betty, Peggy, Pete, Harry, Roger, Ted, and Megan, to an extent (and no, the Sharon Tate nod was just there as a totem of paranoia and chaos; the show would never do something so bluntly literal as forcing a murder mystery into the factory). He’s already burned the house down and rebuilt it. Now Don just needs to finish the spiral and visit the end place.

But what really convinces me is that my wife, Victoria, a completely obsessive Mad Men nut, hit this very same conclusion over the weekend while we rewatched the first half of season 7.

2) Roger Sterling is going to die.

I don’t know if you can excuse the series for not revisiting Sterling’s mortality after back-to-back coronaries way back in season 1. Plus he’s already juggled oranges. Plus there’s creator Matt Weiner’s penchant for giving it away with dialogue that sounds obvious after the fact. Here’s something I blogged two years ago on that front (by the way, was I right about Ginsberg or what?):

At the end of Season 3–two seasons before his suicide–Don tells Lane that he’d be a figurative “body” thrown overboard. At the outset of Season 5, Lane is in the office and says “I’ll be here for the rest of my life.” To that end, Roger has said the following: “It’s a lot easier for them to replace you than it is me,” (I read this as nod to how fun his extroverted character is to write), and “This is my funeral.”

Then there was that potentially foreshadowing letter addressed to two dead men, plus Sterling:

I suspect this season is about Roger’s death. That Slattery directed this episode where Roger’s lookalike Pfc. Dinkins shows up dead confirms, in my opinion, that Roger isn’t long for this world. He has a heart condition, there have been broken hearts and heart doctors everywhere, and the letter to “Sterling, Gleason and Pryce” doesn’t bode well for “Mad Men”’s most affable character. Joan’s expression as she folds the tiny clothes of her own curious child is mournful even before the news airs from Chicago. I have a bad feeling, given that all the dads are gone, that Kevin’s dad will be going soon, too.

Sterling has been the cocktail-swinging, LSD-dropping company hero—he brokered the deal that saved Don’s career, he landed the General Motors account. He revitalized his legacy and now there’s nothing left for the silver fox to do.

3) Someone has to take a long, hard, literal fall.

It’s in the opening credits: a man plunging from a skyscraper. Weiner loves writing scenes in and around elevators, and Reddit loves dissecting them. And remember that jarring moment of symbolic tension from season 5?

Let’s go ahead and debunk the elevator thing in Weiner’s own words:

In my mind that actually happened. The elevator wasn’t there—which we know happens all the time. I thought that was an amazing cinematic representation of his emotional state. He still had one thing left to say to her, and she’s gone, into the abyss. She’s gone off on her own. That’s all that was ever supposed to be. Is someone going to fall down an elevator shaft? No. I will actually go on record as saying that.

OK, but he didn’t say anything about an account man going out the window, did he?

This is just paying the bills, as any Mad Men preview worth its URL has to mention this long-standing Chekhov’s gun. In this case it’s a literal rifle Pete bought in a petulant bit of post-marital angst to spite his wife after spending an afternoon at a department store trying to take back a wedding present and only receiving store credit for his efforts. Since season 1, it’s been sitting in his office and making cameos. But wait, is that even the series’ Chekhov’s gun? Reddit thinks it’s the advertising firm, McCann Erickson, that finally bought Sterling Cooper & Partners after seven seasons of looming as a big bad. Something wicked this way comes:

The real Chekhov’s Gun is McCann. The fact is that McCann was shit upon by every character, due to their reputation as villainous anti-creatives, but Roger decided to give into them after a decade of overtures. Unsurprisingly, Bert had to die before this happened, because it’s a bad idea. Think about it: Bert said Cutler was a leader, and that Roger didn’t operate like one. Cutler wasn’t on Bert’s team, because he’s a disloyal person who’d put SC&P into a complete tailspin if he ever took over. So what does Roger do? He sells the goddamn company to a larger company headed by people like Cutler! The next half of s7 is called ‘The End Of An Era’, and considering that Bert is dead, SC&P is close behind him, thanks to Roger Sterling’s brass balls.

As for the rifle? The jury’s still going back and forth on the threads, but I think we circle back—though not in a particularly dramatic or mortal way.

The office’s most jaded and functionally depressed creative is locked into a five-year contract. Let’s just defer to the perpetual Mad Men theorists over at Uproxx:

An incomplete list of things Ted did in the first half of this season:

…Maybe he’s the silhouette tumbling through the sky in the opening credits.

Not going to happen, but worth spotlighting because it highlights the series’ open-sourced nature with respect to directorial intent and interpretation. A wise man once told me that conspiracies are “simple answers for simple people.” This is far from that, but it’s a testament to how fun it is to connect dots. Here’s the parallel:

In 1971 one of the most bizarre and fascinating cases of air piracy in American aviation history — and currently the only unsolved one — was carried out by a man with an alias, wearing a perfectly pressed dark suit and dark sunglasses, with a cigarette in one hand and a bourbon and soda in the other. No one was killed. No one was hurt. No chaos or terror was caused. It was a hijacking conducted without a known motive, by a wellspoken man who then disappeared and was never identified, found, or heard from again. It was as though he never happened.

Lindsey Green’s post is hypercompelling and leaves you convinced… until you realize that, come on, that’s a terrible way to end Mad Men.

7) Harry Crane’s Camaro is the key to unlocking this mystery!

From Reddit: “Why has nobody pointed out that the Camaro that Harry Crane is showing off in the preview is the same one that caused Pete to get tossed off the GM account at the hands of Bob Benson?”

Mad Men loves using symbols to conjoin its world and douse it in context, but it won’t have any sort of plot bearing. It’s like how Stan had a weird poster of an Israeli militant or how Peggy’s name was probably written as an ode to Ann-Margret.  It speaks to the psyche of the times, not the plot.

This is not a show for people that want fluid, logical action. It’s a series about how the past shapes us and how we adapt and survive the day-to-day. There’s only seven more of those sweeping fashion blog posts left to dissect; I’ll see you on the other side of the bottle.