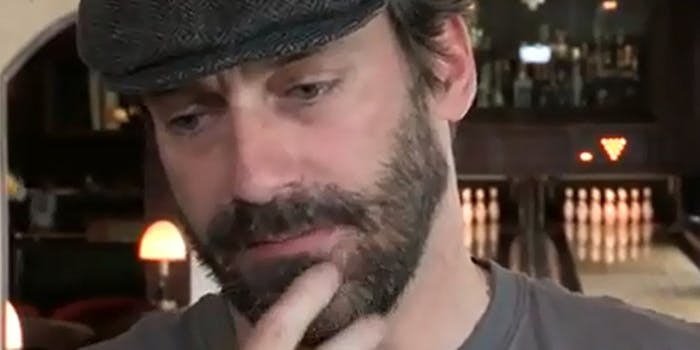 Since the Nerdist YouTube channel launched earlier this month, a number of shows like “Cute Things Exploding” and “Ain’t It Cool” have popped up. But it’s perhaps “Chris Hardwick’s All Star Bowling” that’s the most fun.

The latest episode sees Nerdist founder Hardwick and his brethren—including Weird Al Yankovic, who has his own Nerdist show—taking on the cast of Mad Men.

Jon Hamm, better known as Don Draper, is along for the ride, along with creator Matt Weiner, Rich Sommer (who plays Harry Crane), and Vincent Kartheiser, who seems much more amiable than his character, Pete Campbell.

From mocking Hamm’s previous roles to the actor trying the ol’ banana peel trick, the heckling is top-drawer here. When you add in phallic Play-Doh creations, this clip is flat-out hilarious.

Hardwick’s dad was a pro bowler, and Hamm is pretty much great at everything he tries his hand at. So there are no clear favorites, and the game is quite competitive.

So far, the Nerdist folks have taken on teams from Machinima and G4, along with a group of celebrity chefs. Upcoming episodes will feature a team from The Walking Dead and, on May 28, a crew from Breaking Bad. We’re sensing a AMC theme here. (Hardwick already hosts a live post-show discussion program, Talking Dead. )

In the meantime, good luck getting Nerdist team’s striking rendition of the Mad Men theme song out of your head today.