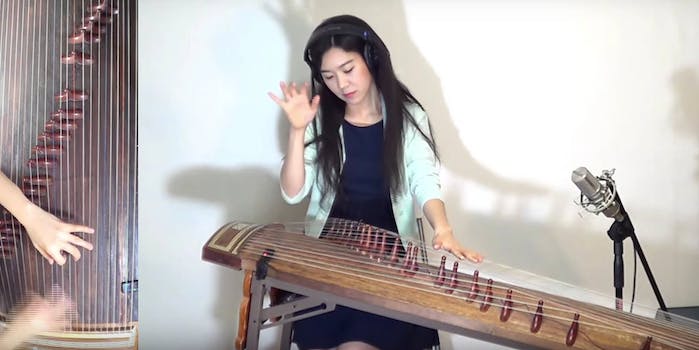 Most rock music fans who shout “Freebird!” at concerts are just being unoriginal trolls, but if Korean YouTuber Luna Lee were to receive that request, she could melt your face off without a second thought.

Lee’s classic rock covers on YouTube differ from the mediocre in that they feature the gayageum, a traditional Korean stringed instrument. According to her Patreon page, Lee’s been uploading gayageum videos for the past seven years, though most of her videos are from the last year alone.

From Jimi Hendrix to Weezer, and even R. Kelly, Lee does it all. Depending on the track, Lee will record multiple parts on the gayageum and layer them over percussion, vocals, or other vital parts of the track.

Though only a handful of her videos break 100,000 views, Lee has a fairly substantial fanbase with nearly 90,000 subscribers on YouTube and more than 90,000 Likes on Facebook. Other videos on Lee’s channel show she often performs live and with a band.

Lee wrote on her Patreon page that she had to modify her gayageum to give the instrument a more modern sound in the context of drums and synths, but the fix is well worth it—her covers are more fresh compared to the weird pop-trap groups kids are listening to these days.