What happens when One Direction fanfic goes very, very bad.

When Penguin announced it was publishing One Direction fan Emily Baker’s new novel, Loving the Band, many readers couldn’t figure out whether it was an original novel or a work of fanfiction converted to an original novel. The Dot reported last month that it was the latter—specifically a fic previously titled “Me, Myself, and One Direction.”  Now the book is out, and the connection between the two has been confirmed.

Naturally, we were eager to get our hands on the book that could be Young Adult publishing’s answer to Fifty Shades of Grey. If Twilight fanfiction can attain that kind of mass appeal, could other kinds?

There was just one hitch—although Penguin describes Emily Baker as a “fantastically talented debut author,” her writing would require more than a little spit and polish if Penguin was going to turn this:

Zayn carried on kissing me, full with lust. I felt his tongue swipe over my bottom lip, asking for entrance. I happily obliged and soon out [sic] tongues were battling for dominance. I felt a groan escape my lips as Zayn’s hands started to trail under the T-shirt and rub against my upper thighs. He once again slammed his hips against mine, teasing me. I pulled my lips away from his and moved up to whisper in his ear,

I felt Zayn’s breathing hitch as he replayed [sic] with a loud moan.

Riley moved towards me, making me move back until I felt my body hit the wall. His forehead fell down gently against mine and I leaned my face up slightly so our noses were touching. I hesitated as he leaned in and then moaned softly as he took my bottom lip between his teeth and tugged it gently. Before either of us could change our minds, he pressed his lips hard against mine and kissed me.

If you think the second version seems far tamer than the first, you’d be right. Though Penguin claimed to have significantly rewritten the novel, the beginning and all the major plot points of the fanfic and the novel remain intact. What has changed, in addition to the grammatical overhaul, is that Emily Baker’s work of fanfiction has become quite a bit blander.

“Me, Myself, and One Direction” is a classic Mary Sue fic. “Mary Sue” is a term for a female authorial self-insert which, while it’s distinctly unhelpful in allowing us to talk about female characters, is very useful as a descriptor of a specific fandom plot trope. In a Mary Sue fic, our authorial insert magically meets two (or more) hot male characters who both fall in love with her and proceed to duke it out for her hand, while she enjoys all the glamour and magic of becoming a part of their fairytale world. 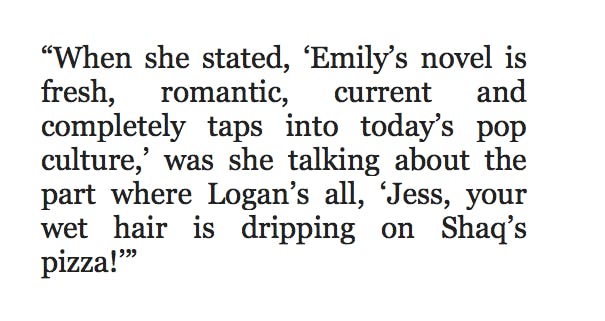 As a fic plot, this is okay. As a novel, it’s shallow and cliche, to say the least. But Penguin has chosen to embrace it and run with it, which means that the story of Loving the Band is absolutely predictable. Of course our heroine, a “messy-haired blonde” named Jess, doesn’t even listen to pop music before her fateful run-in with the boys. Of course their meet-cute involves an accidental collision. Of course the two hottest members of the band, in this case Harry and Zayn, who’ve been updated, respectively, as “Shaq” and “Riley,” immediately fixate on her.

(This collision, by the way, is frustratingly vague: one moment our heroine is wandering around the restaurant muttering about those loud boys in the back who won’t stop singing, the next she’s sprawled on the floor with food down her dress and a bevvy of beautiful young men eager to help her. Who did she actually run into? Was it the waiter? Is this a “pop groups serve yourselves” pizzeria? Why do accidental collisions-as-meet-cutes always result in the heroine falling down? Why can’t the heroine knock the guy to the floor for once? Am I obsessing over this detail to distract myself from the fact that this is only Chapter Two?)

Things proceed exactly as you’d expect, with our heroine shocked to learn that the polite boys who’ve insisted she sit at their table are actually members of international pop phenomenon The Only Truth. Both Shaq and Riley are inexplicably drawn to Jess, and fate proceeds to give them numerous reasons to keep meeting, from paparazzi stalkings to not one but two car breakdowns. It takes seven chapters before anyone thinks to exchange phone numbers.

The characterizations in “Me, Myself, and One Direction” are more than a little bizarre—Zayn’s portrayal in particular is, let’s just be blunt here, racist: he’s a weirdly villainous, overtly sexual, aggressively flirty character who inexplicably nearly drowns our heroine at one point, in a scene that Penguin actually chooses to leave in the novel. Here’s the fanfic version, in which Zayn picks up Jess and carries her into the ocean despite the fact that she’s clearly terrified and unable to swim:

I looked up at him and he had a massive grin plastered on his face.

“Harry, Help me!” I shouted, but all he did was look up at laugh, I felt betrayed. [sic]

Zayn looked down at me and got close to my face, we had now stopped moving. “not even your Harry can help you now.” he chucked a menacing chuckle. [sic]

Despite her protests, and (in the novel) despite Jess’ best friend screaming, “Nooooo!” Zayn/Riley drops her into the water, stands there while she drowns, and then runs away after Harry/Shaq flings himself into the ocean to rescue her.

At this point, you may be thinking: Why? Why doesn’t Jess do more than say “No!” a little and then let herself be dropped into the ocean? Why does Zayn/Riley only show up to flirt, hit on, or otherwise sexually menace Jess when he’s not actually endangering her? Where are all the adults? Why is Jess’s best friend Bree inexplicably renamed Tegan?  And why, why, out of all the actually good works of fanfiction on the Internet, did Penguin pick this one?

The Daily Mail reported in October that, “Senior Fiction Editor, Lindsey Heaven, was browsing the site when she came across Emily’s story, and felt the teenager was ‘just the right kind of new talent to write such a novel with powerful emotion and authority.’” This statement leads us to wonder if Ms. Heaven actually thinks that all fanfiction is this bad. Perhaps she feels that if she wants to compete with Fifty Shades of Grey, her only option is to wince her way through the spelling errors and bizarre characterizations of a fic like this one.

Does she truly believe that “Emilyy’s” (Baker’s fanfic pen name) writing is the cream of the fanfic crop?  When she stated, “’Emily’s novel is fresh, romantic, current and completely taps into today’s pop culture,” was she talking about the part where Logan’s all, “Jess, your wet hair is dripping on Shaq’s pizza!” Or the part where Jess is incapable of doing anything by herself, but it’s okay because Shaq is always magically on hand to do it for her? Or the part where Jess readily forgives Zayn/Riley for dropping her in the ocean and then leaving her to die, then makes out with him as a bonus?

Baker’s fanfic may be the most popular fanfic on Movellas.com, but her 30,000 hits and 1500 “likes” is hardly spectacular. Why, for example, couldn’t Penguin have picked this Mary-Sue-accidental-collision-with-Harry-Styles fic? It’s got half a million readers and the heroine doesn’t even fall down! Or this Harry/Louis fic where Louis is a sparkly go-go dancer? Sure, it’s only got 3,000 hits and it’s slash, but Louis is a sparkly go-go dancer!  Is it really that hard to go to the Archive of Our Own, click “Advanced Search,” and then sort by hit count? Do the Big 6 just assume none of the good writers would be willing to write a romance novel about a boy band, so why bother asking?

Please, editors and agents, I am begging you, here. You have all the advantages of knowing that right now anything you package with a black and silver cover, or anything that once began as a hit fanfic, is going to sell to someone, so why not take that power and use it to promote good writing instead of picking one of a gazillion identical Mary Sue love triangle fics and then defanging it?

The unexpected plot twist of Loving the Band is that even though the heroine is the only character whose name doesn’t change, everything else about her does. In the fanfic version, Jess is totally into both Zayn and Harry—and who can blame her?  Her “how bad do you want me right now?” isn’t a throwaway line; to the end, our Jess is confident and sexy, and she doesn’t take Harry’s shit when he calls her “easy” for making out with both guys.

But a sexually confident teenage girl who just can’t decide which hot guy she likes best was apparently too wild a concept for Penguin to risk.  In Loving the Band, it’s clear from the first moment which guy Jess will choose—if only because whenever she makes out with the other one she’s immediately riddled with guilt. What comes across as indecision in the fic reads as cluelessness in the novel: after being hit with more anvils than Wil. E. Coyote that Boy 1 is in love with her, including being informed that he’s in love with her, Jess is nonetheless totally surprised when Boy 1 finally ‘fesses up.

Her reluctant, guilt-ridden acceptance of one boy’s affections, while constantly doubting those of the boy she really wants, is basically New Moon redux. And really, if Penguin was going to go the Twilight route, it could have done so with Twilight fic writers. In fact, here’s a popular Twilight boy band AU just ripe for the plucking.

There, traditional publishers; I’ve saved you a little time. Please consider spending it discovering where all the good fanfic is.