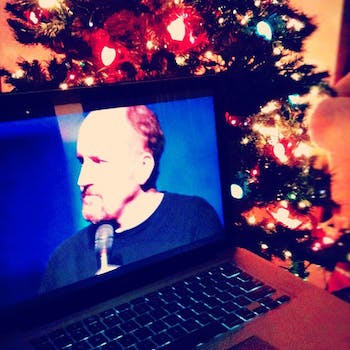 Louis C.K. might have made more than $1 million if he went through studios, Paramount exec says

A Paramount executive thinks Lous C.K. made a mistake by going directly to his fans and bypassing studios. Many disagree.

A million bucks in 12 days sounds like a pretty decent income for a comedian—especially if it breaks your own personal earnings record. But it’s still not as good as “monetizing” your comedy via selling duly copyrighted content through major media outlets like Paramount, according to Al Perry, the worldwide vice president of content protection and outreach for Paramount Pictures.

Louis CK did indeed make $1 million last December when he bypassed the major media outlets to sell his online-only comedy concert, Live at the Beacon Theater, direct to fans on his website, for $5 per download.

For fans, that’s much cheaper than buying a DVD or cable-TV subscription, which is how CK’s work is usually released. For CK, he made more money selling direct to consumers than he does from cable and DVD sales.

But Al Perry thinks CK’s business model is a failure, because content creators like CK can’t “monetize” their work unless they sell it through traditional channels like Paramount. Perry apparently made this claim on April 10, when he spoke to students at Brooklyn Law School about the horrors of what he calls “content theft.”

Derek Bambauer of the Harvard law blog attended the lecture and said:

“Perry opened by noting that one has to articulate a problem before seeking to solve it, and he refers to the problem as “content theft.” He pointed out that copyright law gives creators the right to monetize their creations, and that even if people like Louis C.K. decide not to do so, that’s a choice and not a requirement.”

In other words, although CK made a lot of money selling his concert directly to fans, he simultaneously ignored his right to “monetize” his creation.

When Masnick from TechDirt discussed this in his April 16 post, he asked, “In what world does going direct-to-fans, building a good relationship, automatically mean no money made at all? Not the one we’re based on.”

“[Perry] literally admits that there may be more indie films and such, but that those aren’t the films that anyone cares about. Instead, you see, culture will be worse off if Hollywood can’t produce the next Transformers movie:

“…. Perry said he doesn’t believe that infringement will wipe out content – rather, it will shift it. We’ll see more small-budget or amateur films, and fewer major studio films. These movies, he suggested, are the iconic ones that people remember and reference, so piracy may have an important cultural impact.”

If Perry’s right, then Louis CK’s Beacon Theater concert is destined to fade into cultural oblivion, what with its lack of major studio backing and all. (Presumably, that’s also why nobody today has ever heard of William Shakespeare: Culture couldn’t exist back then because there were no major studios to distribute it.)

Perry’s concerns inspired mass chortling from the Internet. On Reddit, commenters suspected he was more worried about the future of Paramount’s bottom line than the future of culture in general.

Other redditors sought to give Perry the benefit of the doubt:

“I think either the notes are misrepresenting or the guy speaking is a moron. [Perry’s argument] poses the question why, if you don’t need to protect yourself from infringement to make money, the government keeps trying to ramp up those protections and the studios keep hurting consumers with onerous DRM.”

Possible answer: because their goal is to protect the studios’ bottom line rather than make things better for creators or consumers.

“If a we didn’t take part in the process then it means nothing… says Paramount.”

“You monetize content when you license it to a big studio and they take all your money.”

“[P]aramount thinks louis ck should have made more money (possibly for them?).”

“”[T]o monetize“, v. – To license content to a corporation that will reap all the profits giving you naught in return.”

Livejournal blogger “Grumper the Bear” had an even less flattering summary of Paramount’s argument: “SOPA was about dinosaurs clinging to an old system. It’s easier to be an independent now, and you make more money. That’s the other reason they are butt hurt. WAHHH! People aren’t signing contracts with us! WAAHHH!”