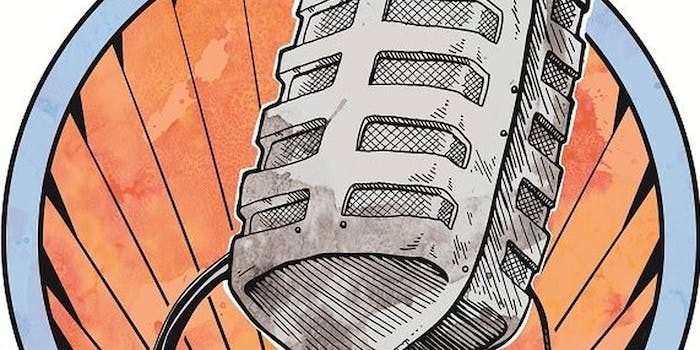 Tuning in to the Los Angeles Podcast Festival

Podcasts soundtrack your road trips, liven up your commutes, and number in the unimaginable thousands. Each week, Podspotting brings you interviews, commentary, and general gabbing on some of the best and most fascinating dispatches from the new audio frontier.

Around one year ago, Chris Mancini and Graham Elwood, hosts and founders of the podcast and website Comedy Film Nerds, shared a minor epiphany: Somehow, the world had yet to see a festival dedicated to podcasts.

This despite the rising profile of podcasting as a medium, and despite how many of the most popular comedy podcasts—Doug Loves Movies, The Nerdist, Never Not Funny—had found great success throwing live events. Music and comedy festivals, notably Bumbershoot in Seattle and the New York Comedy Festival, had begun to embrace podcast tapings as one more plank in their live entertainment lineups. But a festival dedicated exclusively to podcasts? So far, bupkis.

Mancini and Ellwood knew there was a void to fill—and they knew they had to tackle it, fast, before someone else rushed in.

“We were like, ‘Wait, do we wait for somebody else to do a comedy podcast festival, or do we want to do it first?’” recalled Mancini via phone. “We realized we’d be kicking ourselves if we let somebody beat us to it.”

The fruits of their labor pay off this weekend as Los Angeles Podfest, the world’s first festival dedicated solely to podcasts, takes place in Santa Monica. An impressive array of comedy podcasts—Doug Loves Movies, Sklarbro Country, The Smartest Man in the World, Never Not Funny, and over a dozen others—will record live episodes, alongside a series of panels and a Saturday night standup show starring several of the hosts, as well as Marc Maron of WTF with Marc Maron fame.

The festival’s other organizers include comedian Dave Anthony, host of Walking the Room, and Andy Wood, the comedian who founded Portland, Ore.’s Bridgetown Comedy Festival. The waters for a podcast festival are uncharted, but so far the L.A. Podfest is shaping up nicely. It might even fulfill the highest aspiration of any startup festival: not losing money.

“I will say that nobody expects to get rich off this festival,” Mancini noted.  “We just want to make it a fun and exciting event and pave the way for a success next year. And to break even.

“So far the response has been great all the way around. It definitely won’t be empty, which is a huge relief to us. There is a need and a demand for this. So we’re very happy to see that we didn’t waste the last year of our lives.”

That Mancini and the other organizers of the L.A. Podfest weren’t wasting their time was at least somewhat apparent from the start. As with the recent tech conference, XOXO Festival, the initial funding needed to make the festival happen came via Kickstarter. That indicated a clear interest in the idea.

Still, there was a definite risk. After all, in music and comedy festivals, podcasts are but one of many entertainment options, breaking up the monotony of the day’s other events. For instance, at Bonnaroo, an attendee can take in a podcast, hop two tents over and see a band.

At a podcast festival, though, an attendee really only has a couple of options: watch a podcast taping or check out a panel. By the end of the day, there’s a risk that even the biggest podcast fan could get tired of, essentially, sitting in rooms and listening to people talk—no matter how entertaining those people may be.

“We really kind of tried to follow the model of a film festival,” countered Mancini. “You don’t go to a film festival and say ‘Blegh, now I have to see another movie.’ And you don’t do that because you have lots of choices, which is what we tried to offer. We tried to be careful about counterprogramming and make sure that at any given time you had three or four tapings or panels going on, all of them different. We wanted to make sure everyone had something that would interest them for the entire time.”

The L.A. Podfest also has the air of a festival purposefully attempting to distance itself from the feel of a comedy festival. It takes place largely at one venue—a Sheraton hotel in downtown Santa Monica and a nearby concert hall. That choice, Mancini said, was one of several that were made in the name of trying to make the event as accessible and low-key as possible.

“We tried to put on a festival where you didn’t feel like you had to see everything. There are plenty of choices, you can hang out and socialize and see as many or as few shows as you want. We wanted it to be low-pressure,” Mancini said. “This is a thing that drives me nuts about big festivals or conventions: You can wait forever to get in and then you find out there’s something you can’t get into. So we limited the attendance of the entire festival to what the big rooms can handle. We didn’t want anybody to be turned away.”

All well and good, but the critical eye might notice one thing in particular that sticks out about the L.A. Podfest: Every one of its featured shows is a comedy podcast. There are no science shows, or politics shows, or health shows. But Mancini said that’s largely a result of the festival being in its first year, with many comedy podcasts already familiar with the demands of throwing a live event. In future years, the L.A. Podfest’s organizers are hoping to include more genres. Mancini pointed to the Freakonomics podcast as the sort of show he’d like to feature.

“The focus this year is definitely on comedy, but there’s a reason we didn’t call it the Los Angeles Comedy Podcast Festival,” Mancini said. “As it grows, hopefully, we really want to add other genres to it. There are so many different types of podcasts and so many engaging and interesting hosts. I’m really excited about having the chance to mix it up.”