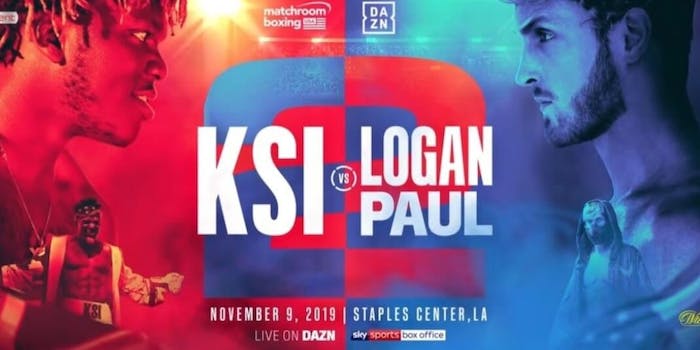 There’s still a sh*tload of tickets available for the Logan Paul vs. KSI rematch

It seems unlikely that it'll actually sell out.

The first Logan Paul vs. KSI boxing match sold out the Manchester Arena before 20,000 fans jammed into the space last year to watch the two mega-popular YouTubers fight to a dissatisfying draw. The rematch, though, isn’t selling nearly as well in the U.S.

With the fight only four days away, a glance at the Staples Center website shows that thousands of tickets remain. Some have estimated that 5,000 to 6,000 tickets are still available to be purchased for $41 to $310.

KSI thinks he knows who’s to blame: Paul, of course. As he wrote on Twitter, “Lmao, Manchester arena had sold out by now. Guess Logan really don’t have ‘supportive fans’ like that.”

Lmao, Manchester arena had sold out by now. Guess Logan really don’t have “supportive fans” like that 😂😂 https://t.co/QLJkYA6mme

Considering Paul lives in Los Angeles where the fight is taking place, it’s a little surprising that ticket sales have been soft so far. But Paul is still urging his fans to plunk down their money to see him headline the card.

Paul wrote, “if you live in LA and you haven’t gotten tickets yet, get your shit straight.”

if you live in LA and you haven’t gotten tickets yet, get your shit straight:https://t.co/yETRzrdz13

In mid-October, Eddie Hearn, the lead promoter of the event, revealed only 7,000 tickets had been sold for a venue that normally holds 21,000 seats. That number surprised him.

“I thought it might go a bit quicker but Staples Center said that’s phenomenal and it will be banged out,” Hearn said via the Independent. Hearn also recently told the True Geordie podcast that Americans typically wait until late in the process to buy their tickets as opposed to British fans who procure their tickets as soon as possible.

According to Stuart Jones, who organized the first Paul vs. KSI fight in the U.K., Staples Center won’t even come close to hosting a capacity crowd. Jones said on Twitter that the upper tier of the arena will be closed off, meaning that thousands of tickets that could be made available won’t be accessible because of a lack of interest.

“The middle and upper tiers never went on sale,” Jones wrote. “Loads of seats removed from the lower tier as well, there’s about 5,000 left out of 12,000 put on sale.”

Asked if that means organizers will “paper” the house—which means to simply give away free tickets to fill up the arena and make it look better for the cameras—Jones wrote, “They have removed every other row from sale in the blocks that haven’t sold. It makes it harder for cameras to pick up the empty seats.”

They have removed every other row from sale in the blocks that haven’t sold. It makes it harder for cameras to pick up the empty seats. pic.twitter.com/0SU02mnVYG

Either way, there will be thousands in attendance on Saturday (and tens of thousands more who stream it live on DAZN). But for now, there won’t be a full house to watch YouTubers with a combined 40 million subscribers throw down.

Jim Boone of K.O. Tickets, though, said the market could still turn around.

“[It’s] not close to being sold out,” Boone told the Daily Dot via Twitter on Tuesday morning. “However the market is heating up and potentially might explode.”