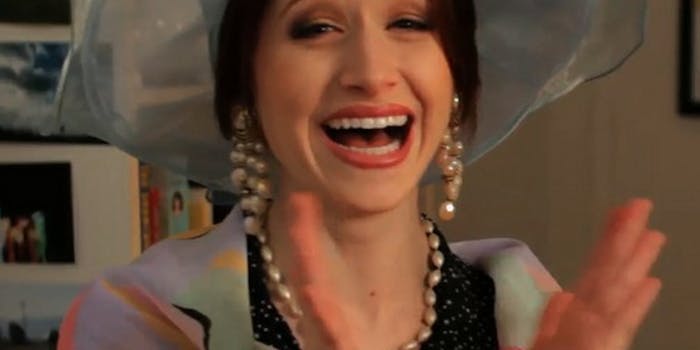 “The Lizzie Bennet Diaries” updates “Pride and Prejudice” for YouTube

Jane Austen’s 19th century classic, Pride and Prejudice, is considered one of the most enduring works in English literature. Now it’s being updated for a new generation and on an entirely new medium—YouTube.

The Lizzie Bennet Diaries is a biweekly Web series created by Hank Green of the VlogBrothers and Compulsions’ Bernie Su. Here’s the kicker: It’s produced as if were the the title character’s personal vlog.

Lizzie Bennet is so much your typical, twentysomething YouTuber it almost hurts.

She‘s saddled with student loans, still lives at home with her two lovely redheaded sisters, and doesn’t get along with her mom. She’s wacky, nerdy, and calls to mind a younger Felicia Day or Tina Fey. Through later segments, we learn Lizzie loves The Hunger Games, adheres to cat worship like most Internet brethren, and thinks dubstep is weird—pretty much YouTube in a nutshell.

In the three-minute episodes, Lizzie relates her various romantic misadventures with suitors, supported by her family and friends. The dialogue is subtly humorous and better than almost any show currently on YouTube, though the constant jump cuts and talking into the camera can be disorientating at first.

Since premiering on April 9, the series, which airs every Monday and Thursday, has earned a considerable following, with an average 80,000 viewers for each of the 16 videos. Given the brevity of each episode, the wait for new segments might seem exorbitantly long, but some viewers may opt to begin watching the series after all episodes have aired.

“This is probably one of the best things I have EVER watched on YouTube,” FishieGirl17  wrote on episode four. “Scratch that. It’s the best.”

The Lizzie Bennet Diaries has taken interactive storytelling to heart. Fans can interact with characters from the show on various social media platforms, an aspect the show has used to its advantage to calm a minor controversy.

In the third episode, Lizzie called her youngest and party-loving sister Lydia a “slut”, which brought forth angry comments from feminist-leaning viewers. Lizzie, who interacts with her audience regularly in the comments section, ended up addressing this “slut” issue on camera in a Q&A segment.

Likewise, Jane, the eldest sister who is “perfect in every possible way” and works in fashion, has a Lookbook account. Lydia has a Tumblr primarily dedicated to GIFs of herself. And Lizzie Bennet has more Twitter followers than the actress that plays her (Ashley Clements). Even Bing Lee, his sister Caroline, and William Darcy all have Twitter accounts, despite the fact that they haven’t appeared on camera yet.

When taken together, the show is an impressive feat, a charming and creative twist on a familiar tale.