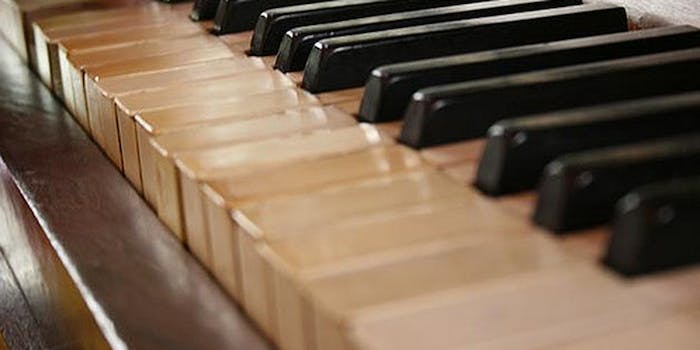 Is your band struggling with its sound? Maybe one of these would help.

Also called “The Living Opera Organ,” the giant instrument is a foot-operated keyboard with twelve keys. But stepping on these keys doesn’t produce the usual tones—instead, a different opera singer is assigned to each pitch, belting it out when the tune calls upon them.

Delighted observers and even some dogs all seem to have a blast on this nifty, crowd-pleasing device, and the singers are admirably stoic as cogs in a larger, if human, machine. The conductor also plays a recognizable aria from the opera Carmen and instructs other participants in creating vocal harmonies.

TFO, which is “the only public television station in Ontario that features opera as a part of their weekly programming” brought the project about in collaboration with the Festival d’Opéra de Québec in order to introduce the not-exceedingly-popular art form to people who might otherwise not experience it. But those kids are bound to be disappointed when they find out that, in the actual show, they’re not a part of the orchestra, and stomping is generally discouraged.