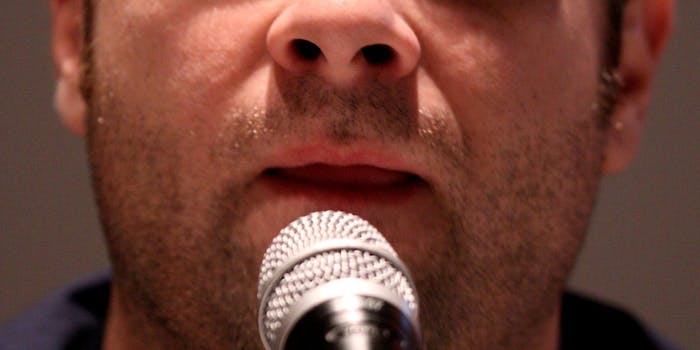 There are plenty of ways to get someone to be on your podcast, but for comedian Kurt Metzger, it requires a lot more aggression than one would think.

On Tuesday Twitter user @literalporn (she’s contributed to Vice as “Claudia C.”) became the latest recipient of harassing tweets from the Inside Amy Schumer writer. Metzger, who hosts the podcast Race Wars with Sherrod Small, responded to an exchange between @literalporn and another comedian who commented on her use of all caps in tweets. She responded:

Hours later, Metzger chimed in with a barrage of tweets, first claiming to not understand what she found so offensive about the initial comedian’s tweet. Soon after he became fixated on her use of “white boy,” quickly escalating with each post.

“I woke up to my Twitter mentions full from this guy commenting on some tweets from yesterday,” @literalporn told the Daily Dot via email. “His tweets ranged from misogynistic slut shaming to racist.” 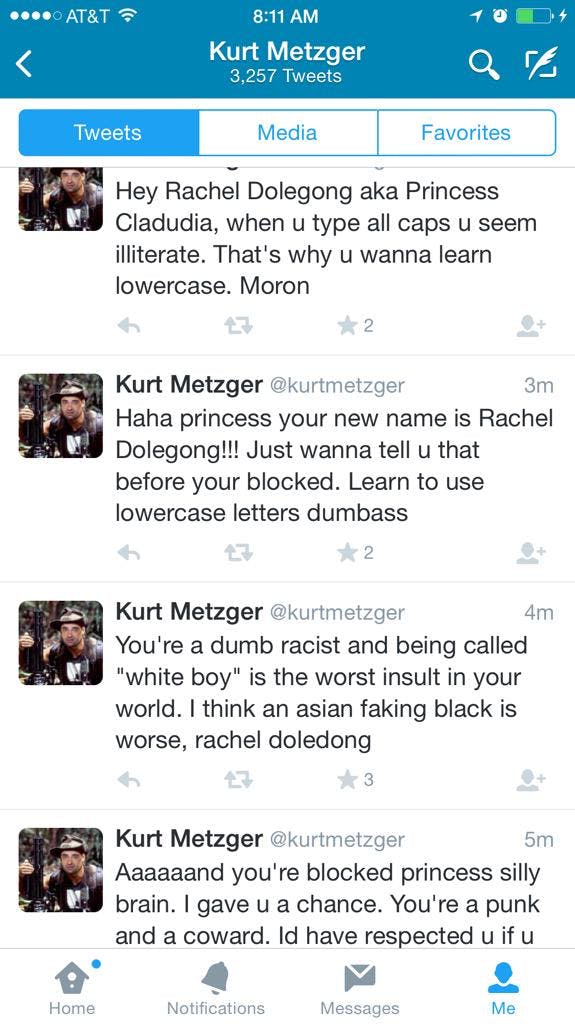 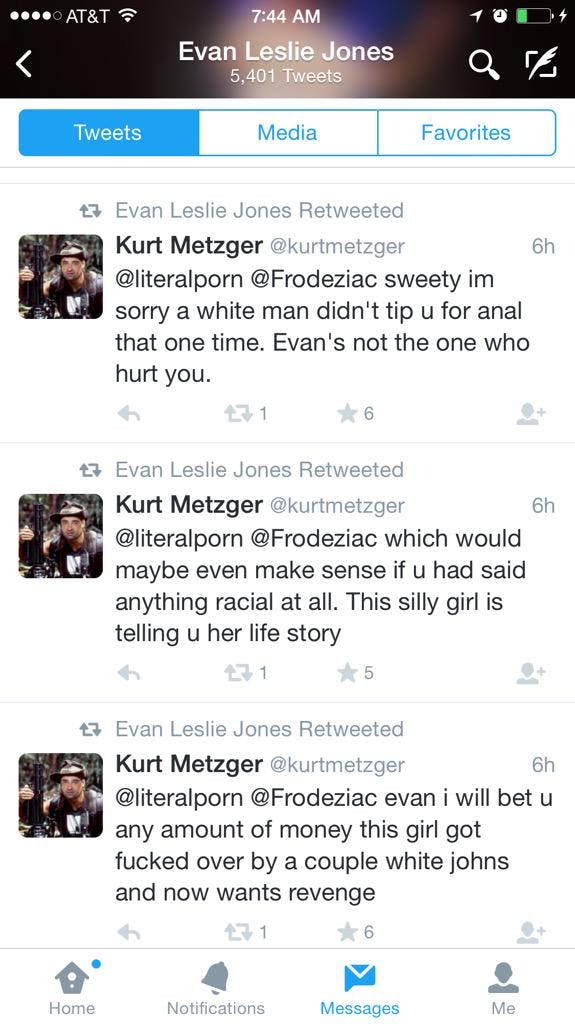 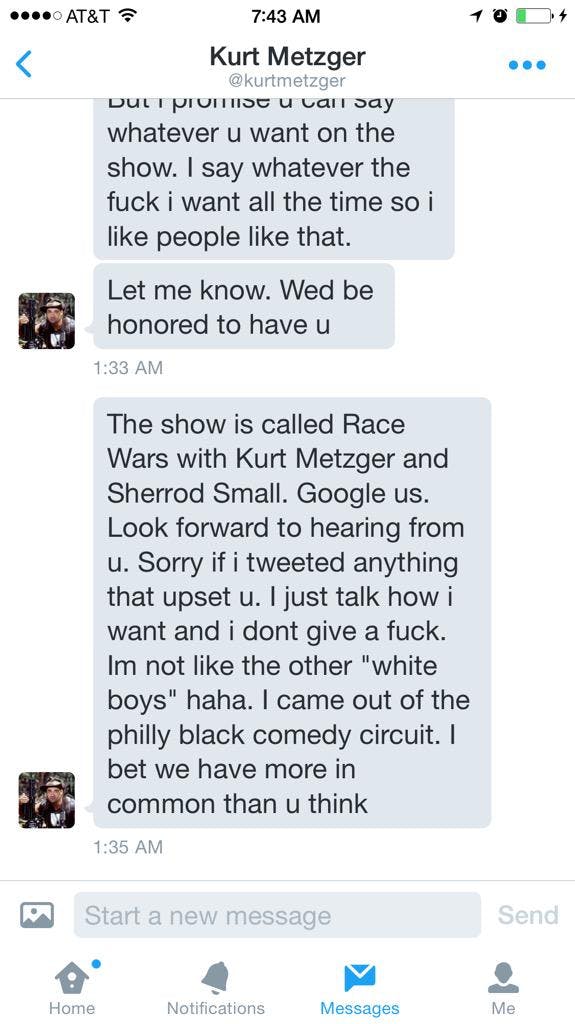 According to her account, @literalporn opened her direct messages to find “these lengthy messages where he tries to [play] nice after the fact and invites me on his podcast.” After receiving the invitation, she posted the contrasting messages. “He was really reactive to the fact that I posted screenshots of his messages and tweets showing how psychotic and two-faced his behavior was. He blocked me when receipts were being tweeted at him.”

It’s not the first time Metzger has been accused of harassing women online. In 2013, the Daily Dot’s Aja Romano reported on Metzger’s “disturbing online trail” of harassment toward two women, outspoken critics of rape culture in comedy. More recently, YouTube personality (and former Daily Dot staff writer) Gaby Dunn says she had an experience similar to @literalporn’s just last month. “I tweeted about Bill Burr’s transphobic comments on Conan to my own timeline,” Dunn said, “and then Metzger started tweeting me/started a campaign to get me on his podcast by harassing me. Luckily, I had him preemptively blocked because I knew of his treatment of women. This seemed to further enrage him.”

Along with Dunn, writers Lindy West and Sady Doyle tweeted in support of @literalporn and women who’ve dealt with Metzger’s alleged harassment.

It continues. It happened years before me, is happening years later. Zippity-fuck-all continues to be done about it. https://t.co/sJ3MQI1ZlJ

And by the way, when Metzger blames oversensitive SJWs and claims feminism, here's a cool info graphic you can use: pic.twitter.com/ZnFyzYee8c

The "come to my podcast" crap is happening because women ARE having conversations in contexts Metzger can't control. https://t.co/0TuMRvSDsb

Doyle shared the earliest account of an online encounter with Metzger that dates back to November 2011. Blogger and podcaster Rebecca Watson documented the occurrence, where Metzger claims to be “attacking shitty college feminism,” in a blog post.

Reached by email, Doyle had this to say about today’s Twitter storm:

Metzger’s weird fascination with me started when I turned down his podcast. Other women have reported the same experience. Metzger has made untrue and even libelous statements about me (at one point, he told an interviewer I had borderline personality disorder). … It’s not the women “provoking” this. None of us are getting special treatment. It’s him, and he has a distinct pattern for how he harasses women online.

Metzger continued to tweet about the exchange, as well as the apparent feminist response, throughout Tuesday afternoon.

Well no one can look at this exchange and say i didn't do my best to make peace.

@literalporn told the Daily Dot that she had not had any interaction with Metzger before Tuesday. “Apparently this guy works for Amy Schumer,” she said. “Which is disheartening because there are so many funnier woman writers and comics that could use the work.”

“I really wish a ‘feminist’ show wasn’t giving my harasser money,” Doyle added. “But I think the most peaceful position I can come up with is that, if he does it to another woman, I’m there for her, and I hope those women keep talking to each other.”

The Daily Dot reached out to Metzger and representatives for Amy Schumer for comment but had not received a response as of press time. We will update this article if and when we hear back.