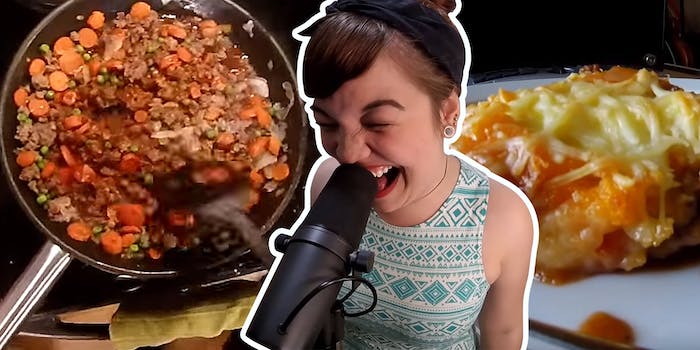 How an inside joke birthed YouTube’s Metal Kitchen

'At the end of the day, music is music.'

YouTube is full of by-the-book cooking tutorials, but sometimes you have to do something a little different to stand out—like convey the ingredients of shepherd’s pie in a sternum-rattling growl.

In late December, she released the first installment of Metal Kitchen, which features Rae screaming the recipe for shepherd’s pie over an instructional video. It now has more than 1 million views—and a wonderful origin story.

“We were in the studio and someone was going to order Chinese food for dinner,” Rae explained. “While I was in the recording booth, they asked me what I wanted to eat and I screamed ‘crab cheese wontons,’ which created a running joke. Afterwards, our friend made a joke saying that I could write a recipe into one of our songs and people wouldn’t know the difference, since the common opinion of metal music is that you can’t understand what the vocalist is saying. Then the idea sort of grew from there.”

In late January, Rae released the anticipated follow-up, which included a dessert course and instructions for the perfect birthday celebration.

“I’m more of a baker for sure,” Rae said. “My stepmom and I used to bake every weekend together. She taught me everything I know about cooking. I like to cook when I have the means to, but I live in a 300-square-foot apartment with no oven, so I don’t cook much beyond what I can make on a stove top.”

Rae, who has been singing with the Anchor for about a year, is presenting an interesting contrast with her YouTube channel, beyond just cooking videos. It also features the Scream It Like a Girl series, which she says was developed as a “message to the metalcore community that girls can scream just well as guys can. We’re hoping that the series will inspire more girls to actively pursue music in a male-dominated genre.”

YouTube has become a platform for experimentation and even satire for metal fans and performers. Jared Dines’s parody videos explore certain genre stereotypes, and Anthony Vincent’s Ten Second Songs series makes metal more accessible. But Rae is playing with ideas about gender in a genre dominated by men, one in which sexism and harassment is still very prevalent.

Her Pop Goes Metal series reinterprets radio-friendly pop songs, and her recent “How People Think I Do Things Vs How I Really Do Them” challenges people’s preconceived notions about metal fans. There’s also an intimacy to the videos, which are typically filmed in kitchens or bedrooms. She says the band only started using YouTube for the Scream It Like a Girl videos, but started rethinking their approach after the shepherd’s pie video went viral. They’re “still learning the ins and outs” of the platform.

In the first Metal Kitchen video, Rae casually applies makeup during the song’s plodding breakdown. It’s a subtle elbow to the ribs: “More metal than you” takes on a different weight. Still, Rae says she and the Anchor are just trying to uplift with music and message.

“I am not here for people who are close-minded,” she said. “If someone chooses to discredit or dismiss my message because of my gender, that is their loss. At the end of the day, music is music.”