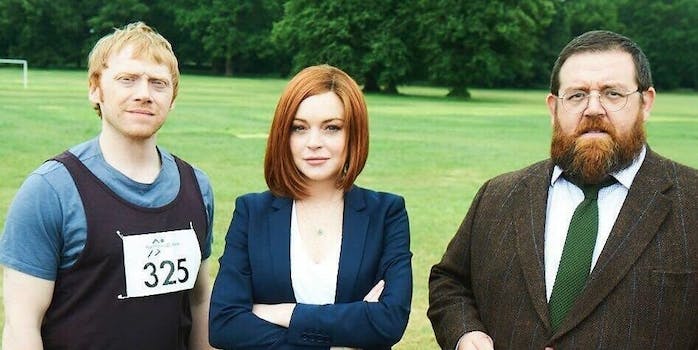 Lindsay Lohan is staging a comeback with new TV show

Lindsay Lohan finally has a project on the horizon!

It’s been a few years since the Parent Trap star has made headlines for anything beyond Instagramming and tweeting, but Lohan shared a photo early Monday morning from the set of a new TV show called Sick Note. In it, she poses alongside co-stars Rupert Grint (aka Ron Weasley) and Nick Frost in a very British-looking field:

According to Deadline, the six-episode first season will air on U.K. network Sky 1 this fall. The comedy follows Grint as a dead-end insurance worker who finds out his quirky doctor (played by Frost) has wrongly diagnosed him with a terminal illness. Instead of clearing things up with his friends and loved ones, though, Grint decides to let everyone continue believing that he’s sick. As you can imagine, hijinks ensue. Lohan’s character (Katerina West, the daughter of Grint’s boss) won’t appear until season 2.

Specifics of Sick Note‘s premiere date have yet to be announced, but with any luck, it will do well enough to quell Lohan’s rallying cries for Freaky Friday and Herbie reboots.