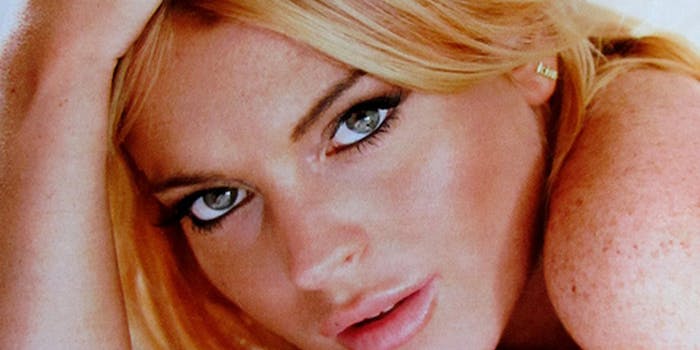 @LILOFANFICTION is the real-time mockumentary the struggling starlet so desperately needs.

Before Lindsay Lohan’s fiery crash into oblivion, she had a good run. Now @LILOFANFICTION, a Twitter account purporting to reveal her innermost thoughts, could make her vaguely relevant again.

Oh, LiLo. The Parent Trap was a cute movie, Mean Girls was one of the best films ever created in the history of history, and those “Saturday Night Live” hosting appearances gave mild guffaw.

Then, faster than the comedown off cocaine, she disintegrated into a nobody. She began allegedly singing, stole jewelry, and most frightening of all, posed for Playboy. So there must be some crazy things going on in her mind!

No need to speculate what those thoughts are: @LILOFANFICTION is the real-time mockumentary the struggling starlet didn’t realize she needed. The parody account started on Dec. 26 and has more than 540 followers—but deserves more.

In her fan-fictional world, Lohan is such a nobody now that even the Starbucks baristas misspell her name: “Lindsay orders an iced caramel latte at starbucks. ‘And your name?’ asks the employee. ‘It’s… Lindsay Lohan.’ The cup spells “Lindsey,” one tragic tweet reads.

Her inbox might as well be an outbox, according to one tweet: “just having woken up at 4 in the afternoon grabs her computer to check her E-Mails. ‘0 new messages.’”

Most depressingly, she needs to scrounge for a $1 pizza, her horrid mother Dina still craves attention, and ex-BFF Nicole Richie is ignoring Lohan’s calls.

So, yes, times are tough!

But look on the bright side for Lindsay: At least someone out there is still thinking really, really hard about la vida Lohan.