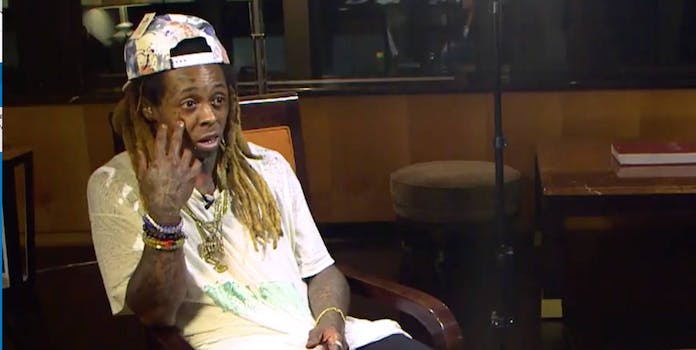 In a sit-down interview with Linsey Davis, Weezy was asked about his feelings on Black Lives Matter. He seemed confused equally by the question and the concept.

“That just sounds weird, I don’t know, that you put a name on it. It’s not a name, it’s not ‘whatever, whatever,’ it’s somebody got shot by a policeman for a fucked up reason.”

He went on to assert that, given his fame and wealth, he’s proof that black lives matters:

I am a young black rich motherfucker. If that don’t let you know that America understand black motherfuckers matter these days, I don’t know what it is. That man white; he filmin’ me. I’m a nigga.

I don’t know what you mean, man, don’t come at me with that dumb ass shit, ma’am. My life matter. Especially to my bitches.

When you hear that Lil Wayne thinks his money & fame make him exempt from racism in America… pic.twitter.com/8ow5p06Y1N

good morning to everyone except lil wayne

When you think of rappers being role models, activists & politically aware, Lil Wayne is the last person that comes to mind. Let's be real.

I'm disgusted by Lil Wayne's perspective on the issue but more disgusted by how he was speaking to the young lady interviewing him. #TTLO

Honestly, I don’t what anyone expected. Talking social politics with Lil Wayne is like asking a Magic 8-Ball for the weather. No matter how many times you try, chances are slim that you’ll get anything resembling a coherent response.

Pitchfork reports that Lil Wayne ultimately walked out of the interview before the program ended, saying, “I ain’t no fuckin’ politician.”

Update 4:19pm CT, Nov. 2: In an interview with TMZ, Lil Wayne apologized for the interview, and walked back his dismissive attitude toward Black Lives Matter.

“When the reporter began asking me questions about my daughter being labeled a bitch and a hoe, I got agitated. From there, there was no thought put into her questions and my responses,” Wayne told TMZ.

Correction: An earlier version of this story misidentified the show Lil Wayne appeared on. The interview was for NBC’s Nightline.