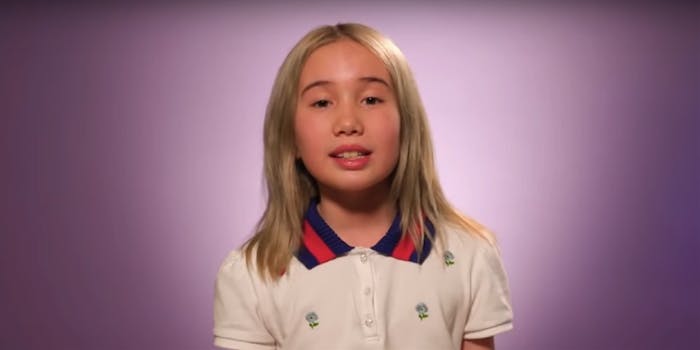 Back in June, Lil Tay’s social media went dark after the 9-year-old went viral for feuds with fellow social media stars and alleged family drama. Last week, new photos appeared on her Instagram account, which has more than 2 million followers, depicting deeply racist images, and then, allegedly, passport that claimed she was born in 2002, which would make her 16.

The quickly-deleted photos were disturbing, even more so because Tay has used racial slurs in her videos. In July, she broke her social media silence to apologize for using the N-word in videos. But her saga is even weirder: As the Daily Beast reports, a man named Alex “Loyalty G” Goller Gelbard is in the business of scripting controversies for Tay. He planned out the initial meeting between her and WoahhVicky, who participated in the April fight with Danielle Bregoli (aka Bhad Bhabie) that made Tay famous. He posted a photo with Tay in April, shortly after the fight.

Over the last five months, Tay’s background and lifestyle has come into question, but that might be part of the script. Gelbard told the Daily Beast that he tried to base her character on Hit-Girl from the superhero film Kick-Ass and employ “controversy concepts” to ignite conversation.

“Controversy market is more of a low-key marketing concept,” he said. “Every video that happens, people talk about it more and more, and the fans talk about what’s real and what’s not real.”

Lil Tay’s Instagram is still empty and her Twitter account disabled. But Gelbard claims he’s revamping her image, and that she will return soon. “It’s going to be obvious,” he said. “When you see it, you will know.”