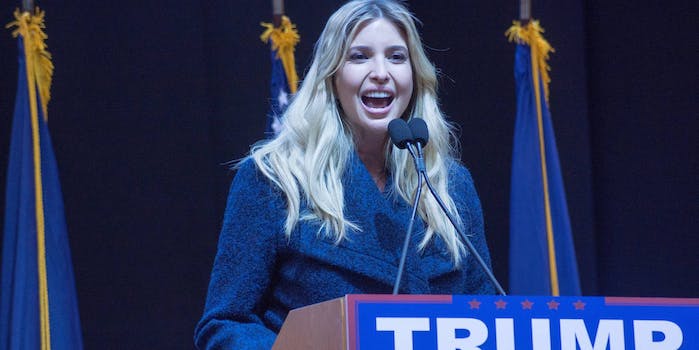 The leading man looks to make a difference.

Republican National Committee Chairman Reince Priebus made it clear last week that the official position of President-elect Donald Trump and the party he now will lead into the White House still denies climate change, and that Trump considers it all “a bunch of bunk.”

That’s why it was so curious when Ivanka Trump held a meeting Monday with former Vice President Al Gore, one of the planet’s most visible climate change activists.

But Ivanka Trump has talked about making climate change one of her signature issues. And Leonardo DiCaprio is trying to help her cause. As the New York Times reported, DiCaprio and Ivanka Trump recently met and he gave her a copy of his climate change documentary, Before the Flood.

DiCaprio’s gift makes sense. If Ivanka Trump is poised to make a large impact on her father’s administration—and the Times writes that she could become the most powerful first daughter in history—a liberal stalwart like DiCaprio (and others who believe in climate change) should be trying to convince her with all their might.

But for Trump supporters, it might not matter. DiCaprio put his documentary on YouTube in October, and the comment section was immediately taken over by climate change deniers and trolls.

Ivanka Trump’s meeting with Gore on Monday eventually morphed into a discussion between Gore and her father.

“I had a lengthy and very productive session with the president-elect,” Gore told the press pool. “It was a sincere search for areas of common ground. I had a meeting beforehand with Ivanka Trump. The bulk of the time was with the President-elect Donald Trump. I found it an extremely interesting conversation, and to be continued, and I’m just going to leave it at that.”

Still, it might be tough for Ivanka Trump (and Gore and DiCaprio, for that matter) to convince her father. After all, his position on climate change has been that it’s a hoax created by the Chinese.