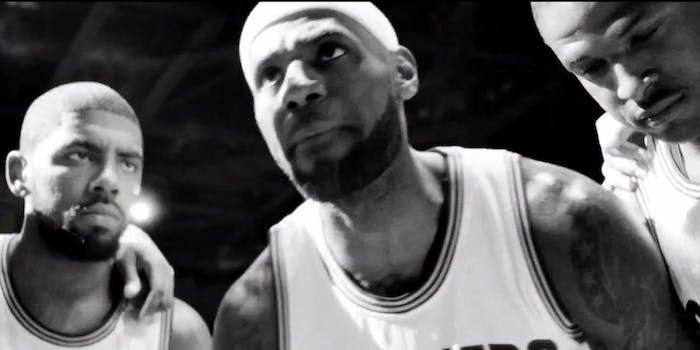 The King James era reboot is upon us and LeBron James has taken to YouTube to celebrate his return to the city he once abandoned.

Game one in LeBron Takes Cleveland 2.0 is commemorated in a Nike ad on YouTube in which the Akron, Ohio native pumps up his teammates and pretty much everyone in the vicinity of Lake Erie with the mantra that we’re all in this together. In case more pregame social media buzz was needed, LeBron’s official Twitter account pimps the two-minute spot that carries on the footwear company’s theme—Just Do It.

My folks check out my new @nikebasketball spot! https://t.co/ahtXQaOn08. This is far bigger than I and I understand that! #Together #JustDoIt

Let’s be clear—everything around this charade is a distasteful PR stunt geared to sell James’ new $200-plus Nike LeBron 12 sneaker line. Whether it’s to prove the heartfelt sincerity that his four-year championship pilgrimage to Miami was just a fleeting whim or to pump up NBA television ratings, the faux-inspirational clip comes off as just another empty Nike campaign. Who among the blue collar crowd depicted in the ad can spend that sort of money for sneakers when Ohio boasts a 5.7 percent unemployment rate?

Lest we forget, Nike’s expensive kicks are made by cheap labor in third-world countries. That fact adds embarrassment to the realization that LeBron will make $19 million this season plus countless more in endorsements such as one promoting McDonald’s’ Monopoly sweepstakes.

Blinded by the light, basketball fans—especially those with short memories and long on forgiveness—are cheering from the virtual sidelines.

New LeBron James commercial will make you want to be from Cleveland: King James is looking to do some healing … https://t.co/c2zfS2Dkok

Now this is how you make a sports commercial. Nike and LeBron. Goose bump-inducing. https://t.co/HfZqVVTuLL

But yo this 🚬🚬🚬 //Nike’s commercial for LeBron’s official return to Cleveland will make you feel all the feelings: https://t.co/Fxa8WdYNQt”