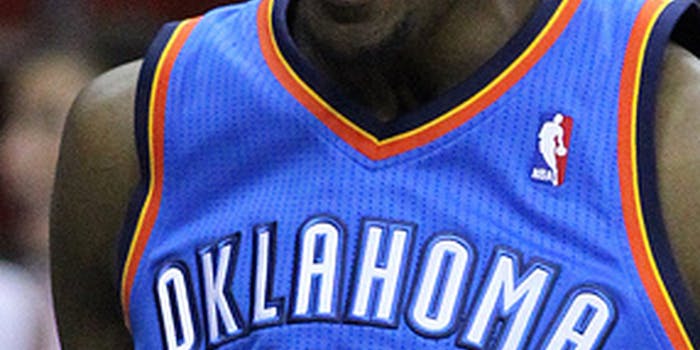 Bored with the NBA lockout and after some trash talk on Twitter, two All-Stars may soon square off in flag football.

Even as the NBA lockout trudges on, two of the league’s biggest stars may still square off in the near future – on a flag football field. Thanks to Twitter.

Miami Heat’s two-time MVP Lebron James (@KingJames) issued the challenge yesterday on the micro-blogging platform to Kevin Durant (@KDTrey5), reminding the Oklahoma City Thunder star that he used to be called “Optimus Prime” on the gridiron.

The unlikely match-up spurred from Durant’s recent appearance at a flag football game with the Sigma Nu fraternity at Oklahoma State University. That event was also instigated by Twitter.

Durant, an avid tweeter with more than 1 million followers and nearly 20,000 tweets, put out an open call for flag football on Oct. 31. Student George Overbey quickly responded after class.

“Got a game tonight in Stillwater!! I need a deep threat!! RT @KDTrey5: This lockout is really boring..anybody playing flag football in Okc.” Overbey wrote.

After a few jabs – “Can you catch?? Overbey joked – details were hashed out through direct messaging.

At the game on Monday, Durant put up some serious numbers on both ends of the field, notching four touchdowns and three interceptions while drawing a crowd that led to police patrol, according to The Daily O’Collegian. (Personally, I’d expect nothing from a fellow Longhorn in Pistol Pete-territory.)

The game has fostered some much needed goodwill for the NBA. Last night, the video below jumped overnight from 15,000 to more than 600,000 reviews and garnered serious praise in the comments section.

“Social media really is amazing,” Overbey tweeted afterward. “But not as unbelievable as what a quality guy KD is. Wow. OKC couldn’t ask for anything more.”

“Big stars get cut off from the world by their cacoon [sic] of fame. After watching this I am a fan, not because [sic] of Kevin Durant’s BB skills but becuase [sic] despite his fame his head and ego are not bigger than a basketball. Two thumbs up to a good man!” added YouTube user purescience2, a comment that’s received 58 likes at last count.

The eventual showdown between James and Durant – a “Done deal,” according to James – should only bolster that, especially if there’s a notable charity component.

In the meantime, I’d recommend closely following your favorite local NBA players on Twitter. Those guys suddenly have a little extra time on their hands.