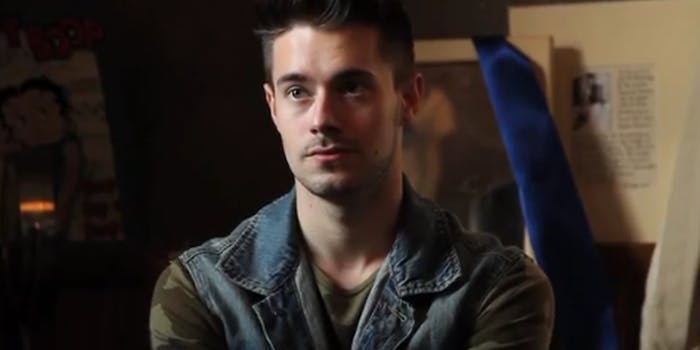 Five years after a viral video made him famous, Chris Crocker talks about his new documentary.

You don’t have to leave Chris Crocker alone, but you should probably give him a break.

Crocker, creator of the infamous “Leave Britney Alone” rant that blew up YouTube, is the focus of a startling, new documentary titled Me @ The Zoo. It premieres next month but the press for it begins now beginning with a revealing profile in the May issue of V magazine.

Since his first video in 2007, his recordings have racked up more than 270 million views on YouTube while the world watched his sideshow of a life spiral out of control. The 24-year-old dabbled in singing, appeared in various reality shows, and even exposed himself in porn—all while being publicly ridiculed for his homosexuality and ultra-femme look.

Crocker’s current looks are a sharp contrast from 2007. His wigs are gone and the makeup is off. Now he looks like a clean-cut American boy, but still retains his signature sass.

This all makes for an interesting profile that gives us a glimpse of his seemingly instant Internet stardom, his personal struggles, and why he loves Britney Spears so damn much.

In an especially interesting tidbit, Crocker tells V that he found strength in the haters and the negative press he received from his early videos. Most notably from the “Leave Britney Alone” rant that has racked up 45 million views.

“I was paying attention to the fact that there were actually people out there who related to me. Having people write and tell me that I gave them confidence and made them feel better about going to school, that’s what I was drawing from. I never took the death threats seriously,” said Crocker to V.

As for his obsession with Spears, he explained that he could relate to her troubles in a video supplement to the print piece:

“When Britney was going through her darker times, it reminded me a lot of my mom because my mom was going through that at the exact same time,” said Crocker. His mom, who was just 14 when Crocker was born, battled post traumatic stress disorder following her return from Iraq.

“All this stuff I am into now is like an extension of my mom,” he said, since she was also bullied—for being pregnant at a young age.

He shunned the big city lights for Bristol, Tenn., and now makes a steady income from singing. He spends most of his days working out and spending time with his family.

Crocker acknowledges that he misses his sassy online persona but hopes the documentary will help open a new calmer, chapter of his life. The documentary is set to air on HBO on June 25.