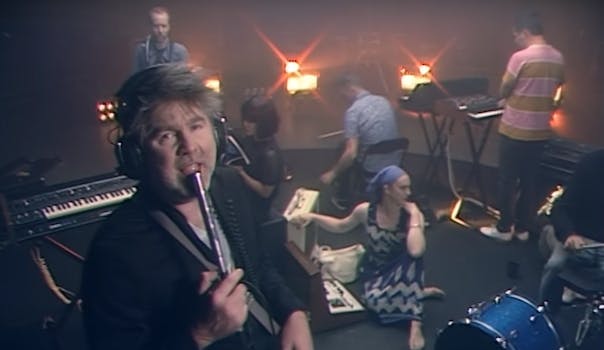 Instead of lashing out at a changing society, James Murphy gets sincere.

Reinvention is both a dream and a curse, and LCD Soundsystem seems happy to embrace both aspects on American Dream, the James Murphy-led outfit’s first new album since throwing themselves an oversized farewell party in 2011. The familiar synth tones, looped beats, sarcasm, and sheer rave-ready energy that made the band a self-aware favorite—EDM for David Foster Wallace fans—return, but they accompany a more brooding and sedated overall sound.

It’s a welcome shift. The band grew steadily between the 2005 debut and 2010’s This Is Happening, but that growth mostly came in the form of refining maturity—drifting only so far from the ’80s-inspired self-consciousness that defines its music and Murphy’s lyrics. If that debut was an experiment, the stadium-filling crowd-pleaser that sold out Madison Square Garden was the result.

The biggest danger in the band’s return, then, is a lack of change—a stasis that only brings more of the same. While diehards might have found that pleasing, such a return to form easily could have been replaced by a remix compilation or a collaboration. Instead, what we have offered to us is a unique and sincere outreach from an aging artist to a darkening and hardening time. The album is personal; Murphy’s over-earnest appeals for sincerity and connection are not lost. But, much like the American dream itself, that shared quest for touch is lost by a society that acts as a suffocating fog instead of a liberating wind.

This mission—to capture the chaos and rubble of a culture trading meaning for data and love for fame—has sunk an ever-growing list of artists. Digital life not only permeates but penetrates each of us, leaving behind an emptiness of addiction and shame. It is no longer a section of our lives but the atmosphere in which we live. But critiquing it encourages pastiche and overwrought thinking—it’s hard to discuss it at all without sounding like some crossover between Alan Watts and your grandmother. For a good example, re-read the first two sentences of this paragraph.

Closer to the mark is Arcade Fire with last month’s Everything Now. Like LCD Soundsystem, Win Butler’s Grammy-winning outfit attempts to color the present in personal tones by reaching into the past for nostalgic sounds. The band pleads with awkward honesty (“please God make me famous/If you can’t just make it painless”) on the Peter Gabriel-inspired “Creature Comfort,” but by the time listeners get to “Infinite Content” they might regret surrounding themselves in media that mostly exists to remind them how often they surround themselves in media.

Such observations are particularly hackneyed coming from musicians. Of the major entertainment industries, musicians were among the first to find their lives and business models uprooted by the end of scarcity. From Napster up until fairly recently, record labels and artists have responded to the internet by punishing users hoping to find the easiest way to support the artists they love. And while that has made life harder for some artists, it’s difficult to take seriously the shaking fists of those who continue to choose to see the internet as a limitation instead of a playground.

While not a distinct critique of this concept like Everything Now, American Dream is blatantly lost within it. Murphy succeeds where others have failed by avoiding the preaching and embracing his fear of the future for what it is, anxiety about whether he can survive within it. “It’s ruling the airwaves/What’s left of the airwaves” Murphy opines in the synth-loaded “tonite” before mocking his own attempts at finding depth in the inherently shallow, summarizing his career as “a reminder/The hobbled veteran of the disk shop inquisition/Set to parry the cocksure of men’s sick filth/With my own late-era, middle-aged ramblings.”

It’s the same sardonic self-reference that fills classics of Murphy’s catalog, most famously on “Losing My Edge” from the band’s debut: At 35, his fears centered on “losing my edge/to better looking people/with better ideas/and more talent/who are actually really nice.” On “call the police,” the nearly-50 frontman is fearful not of what changed but what stayed the same—“The old guys are frightened and frightening to behold/The kids come out fighting and still doing what they’re told.”

Instead of lashing out uselessly at a society changing around him, Murphy strips down the desire to capture 2017 to its core, existential element. LCD Soundsystem has long been a band obsessed with perspective—hence Murphy’s habit of being mocking and sincere in the same breath. American Dream uses now not as a reference point for the past, but for the future, all while recognizing the only people who fear it are those who think they can stop it.